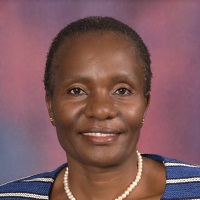 UK Board; Treasurer Kenya Board

Ms. Winfred Osimbo Lichuma is a practising human rights lawyer in Kenya with a bias on women and children’s rights. She is the current past Chairperson of the National Gender and Equality Commission(NGEC) in Kenya, a consititutional body charged with the responsibility of monitoring gender and inclusion in Kenya for the special interest groups i.e. women, persons with disabilities, the marginalized and minorities, children, youth and older members of society. Winfred holds an LLB from the University of Nairobi, an LLM from the University of Essex in United Kingdom and a MA in Gender and Development from the University of Nairobi. She has served as Commissioner with the Kenya National Commission on Human Rights for a period of 5 years before joining NGEC . Winfred started her career in 1992 as a magistrate in the Kenyan Judiciary and served for 10 years. She was touched by the plight of people living with HIV and AIDS and seeking to make a difference, she resigned from the Judiciary and joined the newly established Kenya’s National HIV and AIDS Control Council to serve as a legal adviser for a period of 4 years.

Key among the roles she has accomplished at NGEC is the advocacy on the search for a framework to enhance political representation for Kenyan women in the National Assembly and the Senate in implementation of the “not more than two third” equality principle provided for in the Kenya Constitution 2010. She has also been instrumental in ending gender based violence and led NGEC to launch a campaign dubbed “Keeping the Promise” which is an accountability call for National and County Governments to implement the laws and policies in place to end gender based violence. It has been launched in 21 county governments and Technical committees established under counties responsible for Gender for sustainability. Mrs Lichuma has been instrumental in holding the Kenyan Government (National and County) accountable on realization of the inclusion principles for women, persons with disability, children, older members of society, the youth, the marginalized communities and groups as per the constitution. This has been by way of issuing advisories and filing public interest litigations. She has contributed to the statrgies that have seen the number of women leadership positions significantly rise at all levels.

Ms. Lichuma was appointed to serve as a panel member of Every Woman Every Child Every Adolescent Independent Accountability Panel (IAP), to oversee implementation of the UN Global Strategy for Women, Children and Adolescents Health to help further the 2030 Sustainable Development Goal’s Agenda. She is the first African woman to sit on this panel having been appointed by His Excellency the UN Secretary General Ban Ki moon (As he then was).

infred chaired the pivotal Public Inquiry which looked into Sexual and Reproductive Health Rights violations in Kenya and authored the report dubbed “Realising Sexual and Reproductive Health Rights in Kenya: A myth or reality.” The success of the inquiry is to demonstrate how national human rights institutions can be used to hold state parties to account in realization of ECOSOC rights and significant changes happened in realizing sexual and reproductive health rights through adoption by the State of most of the recommendations from the report.

Winfred has spearheaded another public inquiry on child pregnancies in Kenya and released a report titled, “Lost Childhood; Drivers of Child Pregnancy in Kenya.” The report documents violation of children and points out the weaknesses in the Kenya’s policy and legal framework as the failure to promote, protect and fulfill children’s rights. Both report make positive recommendations to the various State bodies to remedy the violation.

For the excellent service, in 2013, the State awarded her a commendation of the Elder of the Burning Spear (EBS), used to decorate her title.