Equality Now has the privilege to partner with women’s rights activists from around the world. Through a series of blogs we will share with you their unique perspectives and challenges advocating for change in their communities. First up: West Africa, where we've spoken with five activists from Togo, Benin, The Gambia, Guinea Conakry, and Burkina Faso.

Ms. Sonhaye Kombate is the Advocacy and Programs Director at WAHRDN, an organization that promotes the work of human rights defenders across West Africa. Recognizing that female human rights defenders are the most vulnerable, she has become a vocal advocate for gender equality. She is affectionately known as “the West African Lady,” a nod to her persistent advocacy and representation of West African women at regional and international fora.

What challenges do you face in your work?

The challenges are mainly attacks on the dignity of women. The objectification of women by traditional society continues to express itself in our relationships at levels where the problem should not even arise, and where you are soon reminded that "you are only a woman." Thinly veiled threats are common in our work.

What is the current situation in terms of promoting human rights in West Africa?

The challenges are particularly cultural, given the fact we work in a male-dominated space, which is hostile to women’s empowerment and their participation in decision-making spheres. The consequence for women human rights defenders is that they endure attacks from several sources: States, parastatal actors, their own families, the groups they work to protect. Another challenge is access to training for women human rights defenders to assist them in receiving a better knowledge of human rights protection mechanisms.

What are some organizational achievements from the past five years?

Since 2014, the network has set up a specific program for women human rights defenders. This new initiative has enabled the organization to pay particular attention to these human rights actors, carrying out capacity-building activities for them, initiating protection and security actions for their benefit, and coaching them during various pleas at the national, regional, and universal levels. 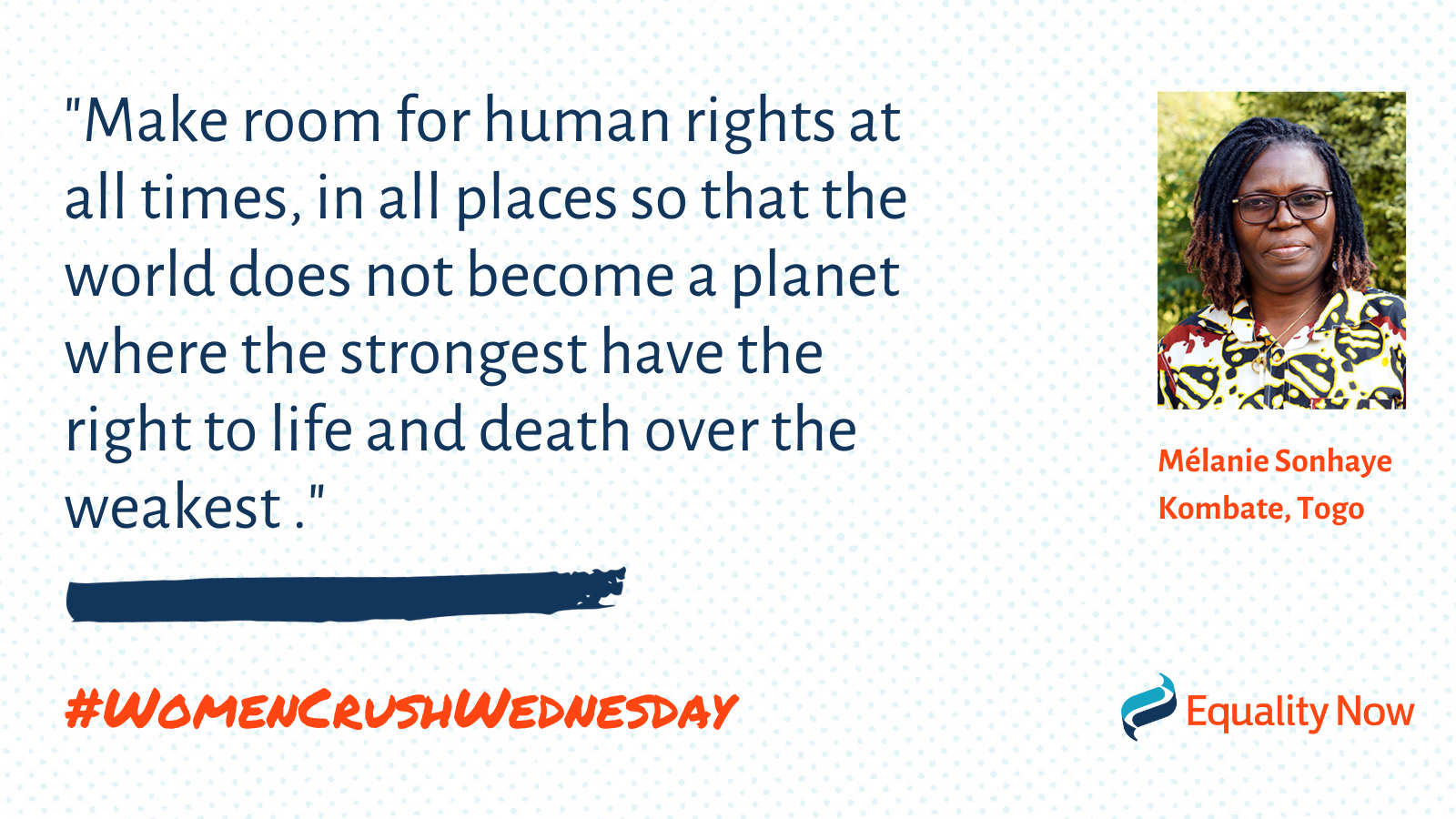 Ms. Dossi Sekonnou is the founder and president of RFLD, a non-profit organization that promotes sustainable development and gender equality. RFLD conducts training for civil society activists, lawyers, and judges on regional women's rights standards and mechanisms as well as advocating and litigating before national and regional institutions.

As a woman rights activist, what challenges do you face in Benin?

In West Africa, and Benin in particular, there are significant challenges in facilitating the participation of women in the political process and having them represented in spheres of decision-making and power. Additionally, ending violence against women has been a challenge. We do not deny the efforts underway, of course, but time is for action. In West Africa, civil society organizations are viewed with a negative eye, therefore it is difficult to implement our various actions for the benefit of women's rights.

What forms of gender discrimination are prevalent in Benin?

Despite the legal provisions in force in Benin, we see discriminatory behavior towards women every day. Stereotypes still exist and in the minds of people women are still the "weaker sex."

Traditional practices such as widowhood rites, FGM, early and forced marriages, and the internment of girls in convents persist to this day. Social responsibilities are still unequally shared between men and women. The problem is that even if public opinion is more and more sensitized, the culprits are seldom punished because the victims are afraid to denounce them.

What are the achievements of your organization over the past five years?

We have organized several advocacy activities on the use of international and regional human rights procedures for the promotion and protection of women's rights in Africa. RFLD has also conducted research on a wide range of issues relating to women, including ending sexual violence. Our activities provide beneficiaries with more knowledge and skills in the promotion and protection of women's rights by using African and international human rights systems to act in cases of human rights violations. 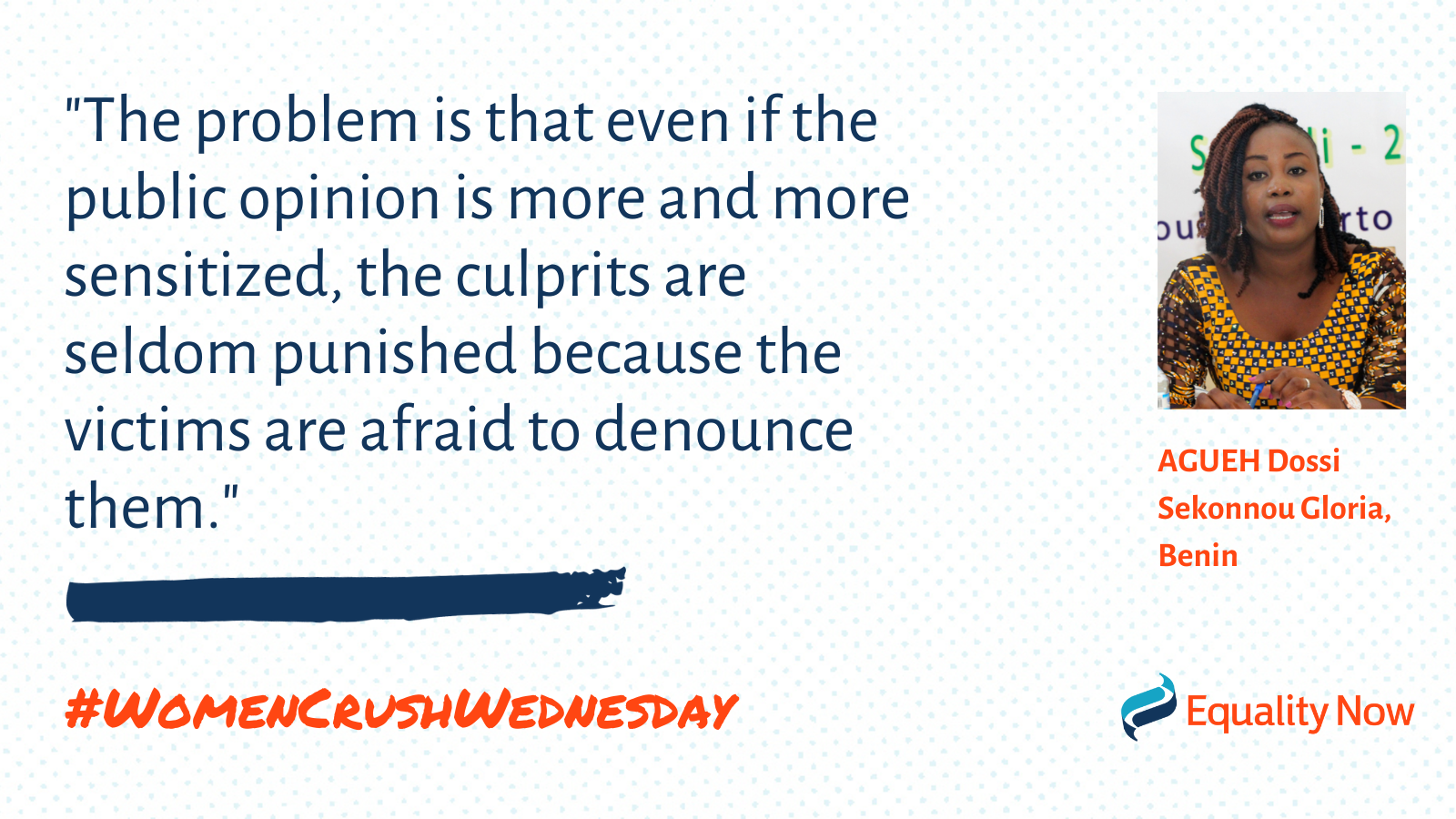 Hannah J. Forster from the Gambia

Mrs. Forster is the Executive Director of ACDHRS, a regional institution whose main objective is to build and maintain a human rights movement in Africa and to promote greater respect for democratic principles. She has been with ACDHRS since 1990 and has worked with both African and international human rights systems and mechanisms for over three decades. Additionally, Mrs. Forster is a trained and practicing mediator and a member of the Women Mediators across the Commonwealth. She serves as a Steering Committee Member for the World Movement for Democracy and the International Civil Society Committee of the Council for the Community of Democracy.

As a woman rights activist, what challenges do you face in The Gambia?

In The Gambia, like elsewhere in the region, the promotion and protection of women’s human rights has not gone without challenges. The main challenges are related to religious, traditional, and cultural barriers, patriarchy, lack of awareness, and sensitization on the role of women which continues to impede the advancement of women’s human rights. However, civil society actors continue to develop strategies to engage diverse stakeholders to implement actions that contribute towards the promotion and protection of women and girls’ rights.

What is the current situation in The Gambia in terms of promoting women’s rights?

The Gambia is a State Party to the Convention on the Elimination of Discrimination Against Women (CEDAW), the Maputo Protocol and other women’s human rights instruments. Other progressive laws and policies have also been domesticated. However, implementation of the provisions of said instruments remains a challenge, like in other African countries. Civil society and other stakeholders continue to engage with governments at different levels to ensure that barriers to the realization of women’s human rights are overcome. The impact of COVID19 has further negatively impacted the promotion of women’s human rights, especially as related to economic justice.

What steps should the Gambian government take to improve the situation for women and girls?

There are very progressive laws that have been passed by The Gambia pertaining to women’s and girls’ human rights, including but not limited to the Maputo Protocol, the Women’s Act 2010, Anti-FGM/C Act 2015, Children’s Act 2005, the Sexual Offences Act 2013, Domestic Violence Act, 2013 amongst others. However, the implementation of said laws remains a challenge. There is a need to move from words to action, and concrete steps need to be taken by the government and complemented by relevant stakeholders to ensure the implementation of the provisions of the instruments. 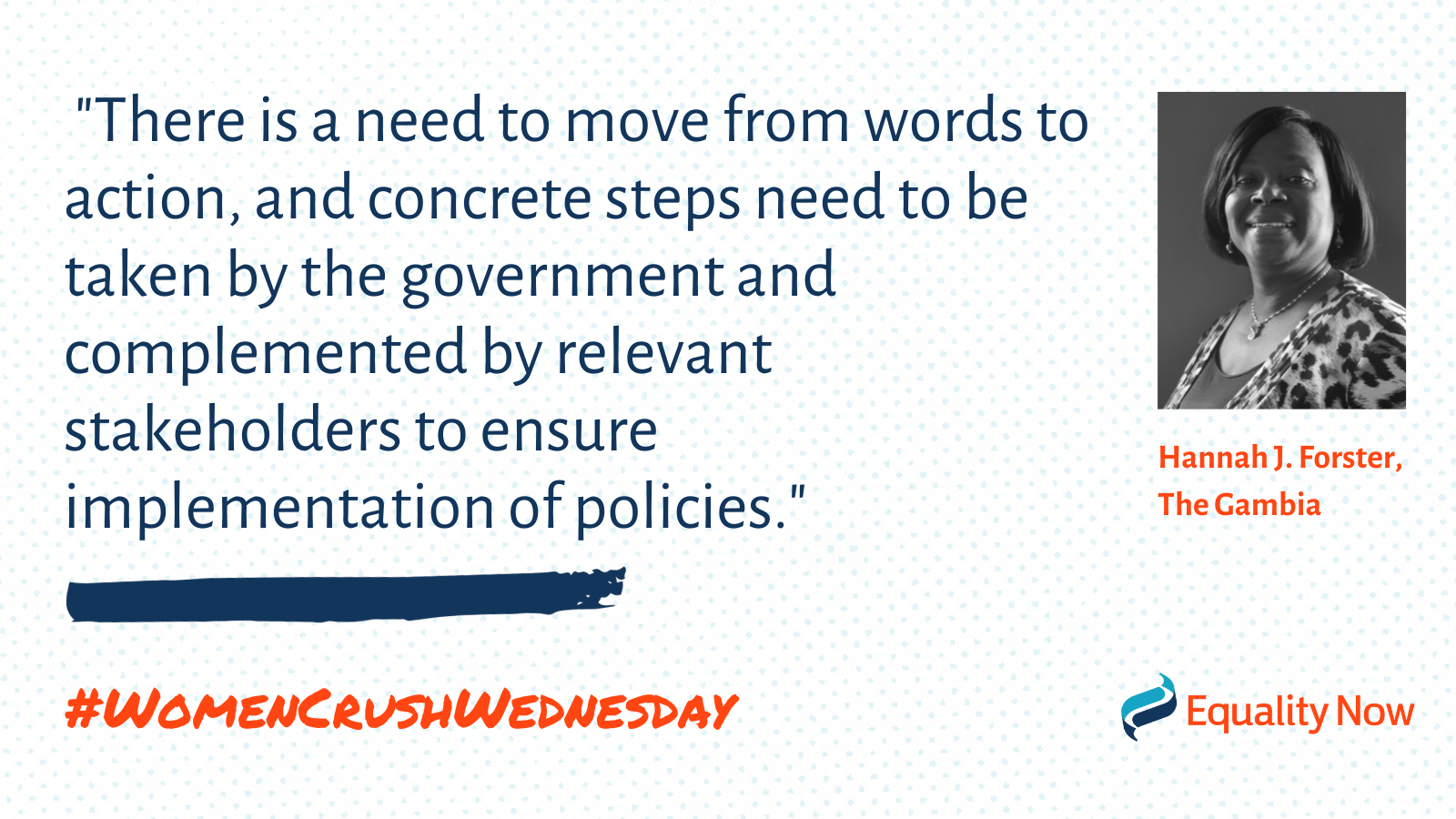 Ms. Sow is the founder and executive director of MEWC, an African woman-led organization that documents the status of women’s rights in Africa. Over the years, she has received many awards in recognition of her work. In 2012, Forbes named her 20 Youngest Power Women in Africa, and she was also named one of BBC 100 Women in 2013 and 2014. She received the Pan African Humanitarian Awards on Gender Equality and Advocacy and the “Change Maker” Award in 2016.

What aspects of women’s rights do you focus on?

We work on documenting the status of women’s rights in Africa. We publish and disseminate original research to promote evidence-based advocacy to uphold women’s rights to pursue gender equality in Africa. We work on most issues, but we do have a particular focus on women’s political participation through our election monitoring to encourage women’s participation in elections and politics.

What is the current status of women’s rights in West Africa?

Most countries have made laudable progress in upholding women’s rights over the last decade. Several countries in the region have enacted legislation and put in place policies and strategic plans to curb violence against women, child marriage, harmful practices, and have promoted women’s participation in politics and decision-making. Women’s rights groups have played a significant role through their advocacy work to ensure that various governments' promises are turned into concrete actions for the advancement of women’s rights and gender equality. Despite the achievements made so far, there is still a lot that needs to be done to end discrimination against women and to ensure women have equal rights and opportunities with men.

What are the achievements made by your organization in the last five years?

MEWC has been the only organization monitoring the African Women’s Decade 2010-2020. Since the decade was launched in 2010, MEWC has been publishing a yearly report tracking the progress, or lack thereof, being made to promote women’s rights and gender equality. The last report of the decade will be launched in September 2021 and offers an overview of progress made during the African Women’s Decade 2010-2020, while acknowledging the areas where more work is still needed. Furthermore, the report will offer evidence on best practices for enhancing gender equality and women’s rights; and strengthen effective advocacy efforts and strategies of women’s groups and CSOs towards the implementation of international, regional, and national instruments on women’s rights. 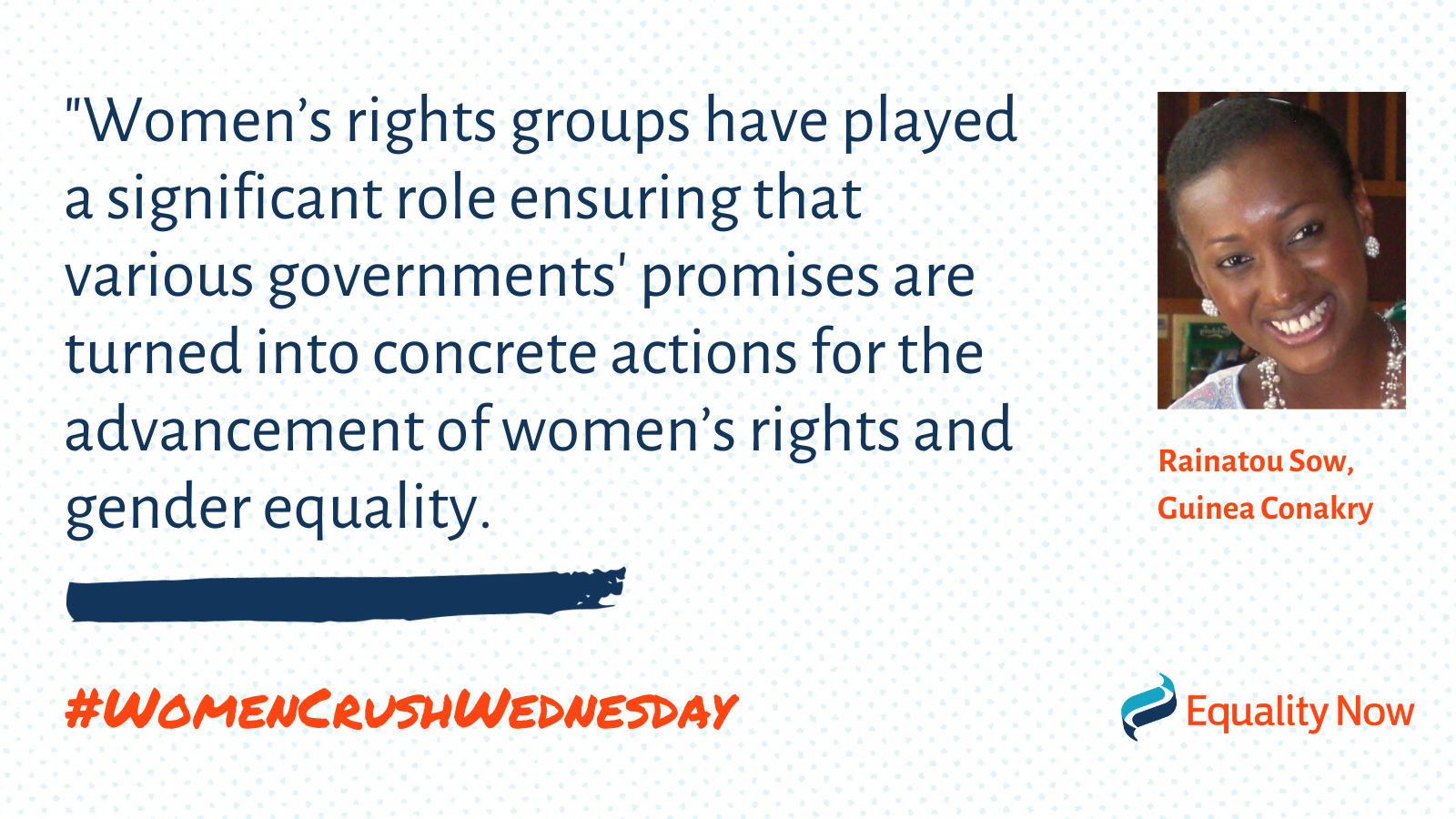 Mrs. Lamizana Mariam is the President of VDF. Established in 2000, VDF works to promote and protect the legal, socio-economic, cultural, and political rights of women and girls. The NGO employs communications campaigns and capacity-building training to sensitize Burkinabé women of their rights. A campaigner against female genital mutilation, Lamizana was the first Chairperson of the National Committee to Combat the Practice of Excision and is Chairperson of the Inter-African Committee on Traditional Practices Affecting the Health of Women and Children. She served in the Government of Burkina Faso as Minister of Social Action and National Solidarity from 2002 to 2006.

What are some positive developments for women’s rights in Burkina Faso?

In terms of political rights, there is a strong political will to involve women in political spheres as evidenced by the adoption of a law that mandates a quota of 30% of women on all electoral lists during the various elections.

We also note a very strong will displayed by the highest political authorities in the field of the promotion of women's rights and the fight against gender-based violence. Burkina Faso’s current Head of State, Roch Marc Christian Kaboré, is the African Union Champion for promoting the abandonment of FGM and his Wife is Goodwill Ambassador of the Inter African Committee on Traditional Practices Affecting the Health of Women and Children.

In addition, a law was adopted in 2015 to prevent and punish perpetrators of gender-based violence and to ensure that victims are cared for. This strengthened the legal protections for women and girls. The government passed Law No. 043/96/ADP amending the Penal Code to prohibit and punish the practice of FGM. Law 006-2004/AN of April 6, 2004, amending Law No. 043/96/ADP, on the penal code, protects the physical integrity of women and girls. This law was revised in 2018 and now provides for additional prison sentences and fines. Article 380 of the Penal Code provides a clear definition of FGM and criminalizes and punishes anyone who ‘harms or attempts to harm the integrity of the female genital organ by total ablation, excision, infibulation, by desensitization or by any other means (i.e. by performing FGM). It also sets out penalties if FGM results in death.

What are the achievements made by your organization in the last five years?

Over the past five years, Voix de Femmes has strengthened and extended its actions to promote and protect women's rights by implementing numerous actions through fifteen projects in ten of the thirteen regions of the country. A "Mariam LAMIZANA for the promotion of the abandonment of female genital mutilation" Prize was instituted by UNFPA for the benefit of journalists and bloggers in order to encourage their involvement in ending FGM. This award constitutes recognition by our partners and the national community for the work done by our organization in the fight against female genital mutilation. 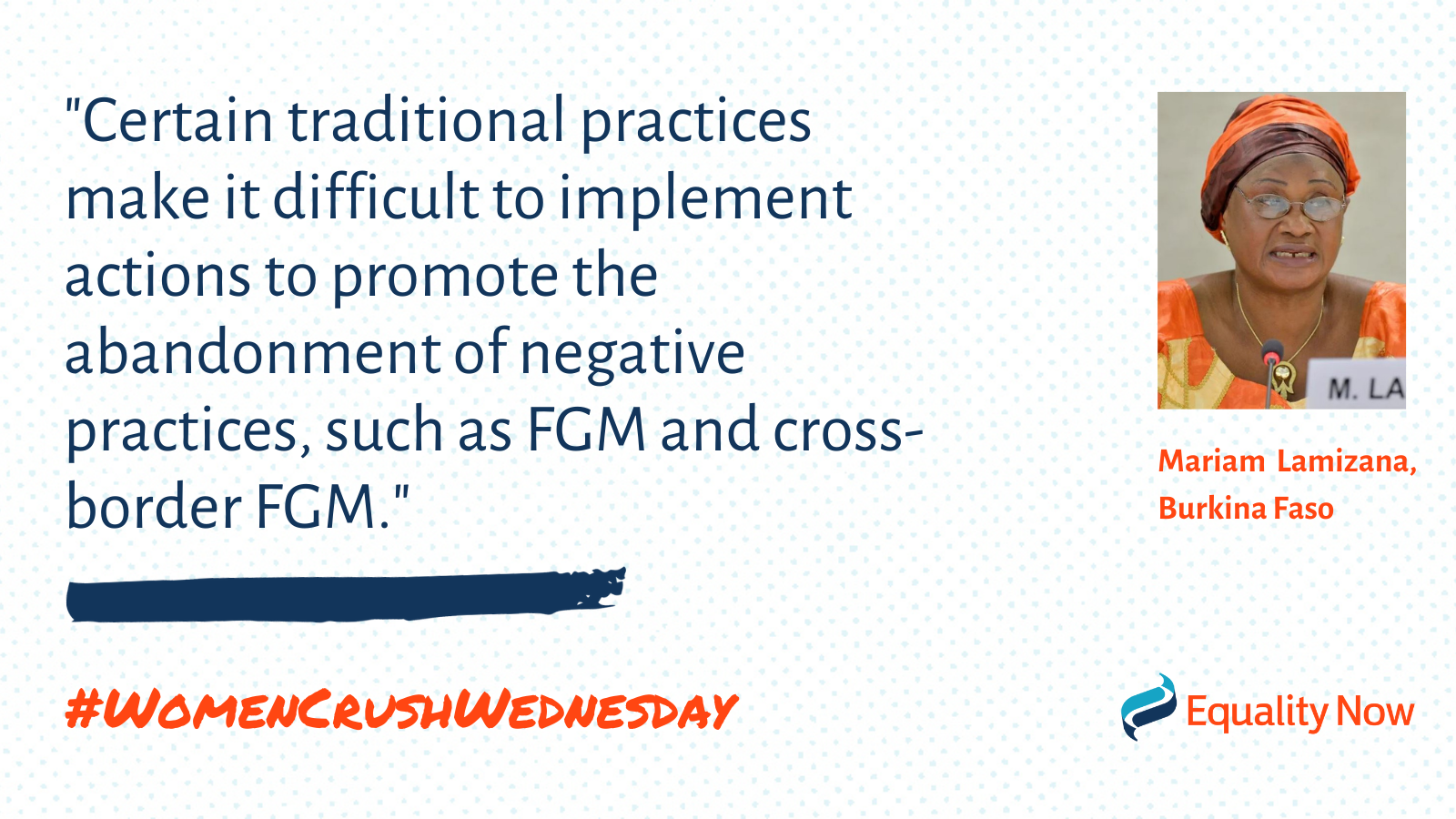 Despite strong legislation, victims of sex trafficking in Malawi continue...

Kenya just committed to ending gender based violence in five years. Here’s how they plan to do it