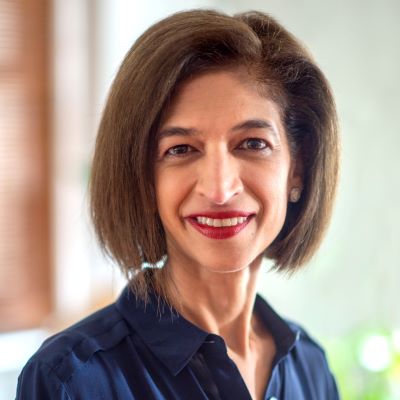 Yasmeen Hassan, Global Executive Director at Equality Now, has spent her career eradicating gender discrimination in the law and advocating for the rights of women and girls across the globe. Driven by her experiences as a girl growing up in Pakistan, Yasmeen Hassan has become a leading legal voice in the global women’s rights movement. She has decades of experience advising international bodies, such as the United Nations, on gender and the law and is a fierce gender equality advocate.

Since Ms. Hassan became the Global Executive Director of Equality Now in 2011, the organization has significantly expanded its operations and its reach. With her leadership Equality Now’s reputation, presence and impact have grown across Africa, the Middle East and North Africa, Eurasia, Asia, and Latin America.

Over the course of her tenure as Global Executive Director, Equality Now has utilized strategic litigation in cases of incest, gang rape, female genital mutilation (FGM), and child marriage. These cases have led to precedent-setting judgments and resulted in international and national legal reform. Equality Now notably used the “long-arm statute” of US federal anti-trafficking law to bring a lawsuit in the United States on behalf of girls abused in Brazil by sex tourists from the United States This groundbreaking case spurred the Brazilian government to protect indigenous girls and has been credited as having a deterrent effect on sex tourism originating from the U.S.

Yasmeen has championed a myriad of new initiatives, including a landmark campaign to take on discriminatory religious and customary laws, specifically those that reinforce patriarchal values within the family and relegate wives and mothers as second-class citizens.

Yasmeen is an established commentator featured by the likes of The Sunday Times, The Huffington Post, The Washington Post, and The New York Times, and has appeared on CNN and Al Jazeera, among others. She is also the author of “The Haven Becomes Hell,” the first study of domestic violence in Pakistan, which became the nation’s submission to the Fourth World Conference on Women in Beijing in 1995. In 2019 she was awarded the Stanford Law School National Public Service Award and was named as one of Forbes’ 50 Over 50 women of 2021.

Prior to her appointment as Global Executive Director, Yasmeen worked with the United Nations Division for the Advancement of Women on the implementation of the Convention on the Elimination of all Forms of Discrimination Against Women (CEDAW) and the Secretary-General’s study on violence against women. She has served on the Council on Foreign Relations’ Advisory Board on Child Marriage and provided expert guidance to the U.N. Trust to End Violence Against Women. Yasmeen clerked on the D.C. Court of Appeals and practiced law at Davis Polk & Wardwell in New York and California. In 1999, Yasmeen did the primary research and edited Equality Now’s first report on discriminatory laws, reviewing States’ progress against their commitment to repealing all sex discriminatory laws as part of the 1995 Beijing Platform for Action.

She is available for interviews in English and Urdu.