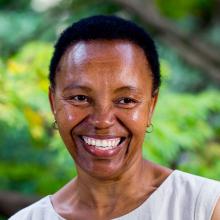 Mary Ciugu joined Equality Now in January 2000. Previously, she worked as the Administration Officer at CARE Somalia/South Sudan; in the tax department at Price Waterhouse; and taught Business Education and English at two high schools. Mary holds a Bachelor’s of Business Administration from Newport International University and a Diploma in Business Education from Kenya Technical Teachers College.

From an early age, Mary saw how unequally girls were treated. She realized that girls were overloaded with domestic chores while their brothers played outside. Later in life, she noticed that girls were dropping out of school; some got married at a young age while others got employed as housekeepers. Yet, boys were encouraged to pursue an education. Mary later saw that in most of the places she worked, there were more men than women. For Mary, implementing the 2:3 gender rule will go a long way in Kenya, to get equality in positions of leadership.

Mary’s inspiration is her mother, who supports girls’ education by sponsoring many girls in the local primary school. Her favorite quote: “In the future, there will be no female leaders. There will just be leaders” (Sheryl Sandberg).

Outside of the office, Mary enjoys reading, cooking and walking. She also seeks opportunities to speak on how to improve girls lives.