Actors Laura and Vanessa Marano produce, and star in a new film, Saving Zoë, to be released on July 12th. While creating this film, the sisters reached out to Equality Now as the themes of sexual exploitation and online sex trafficking touched on in the film are some of the issues that we tackle every day. Equality Now’s Americas Director, Shelby Quast, sat down with Laura and Vanessa to talk about about the film and the partnership with Equality Now.

Shelby: What prompted the idea to turn the best-selling novel, Saving Zoë, by Alyson Noël, into a film?

Vanessa: Ten years ago, Laura and I both had some setbacks in our careers. Financing falling out of films, parts recast with different people, and of course just the normal rejection you face on a day to day basis in the entertainment industry. It was very frustrating. My mom (producer, Ellen Marano) was basically like, "well, let's take our career into our own hands." So, we went to the bookstore and started looking for books with teenage girls on the cover. Saving Zoë took us by complete surprise. It was a such a powerful story about grief and love. It spoke about an issue that is not typically addressed to teenage girls in such an accessible way. We knew that if we were truly going to take our career into our own hands and tell a story for the first time as producers, this was the story we wanted to tell.

Shelby: In creating this film and portraying these characters, what have you learned about the issue of online sexual exploitation?

Laura: Honestly, I think my mom, sister, and I didn’t have too much knowledge about this issue before we started. Through Saving Zoë and working with Equality Now, we learned so much about online sexual exploitation as well as sex trafficking. First of all, we had no idea how prevalent both issues are in the United States. It feels far away, but in actuality, it affects way more people than we know, which brings us to the second thing we learned: every survivor of sexual exploitation has a different story, but a lot of the time, the perpetrators don’t seem like perpetrators at all. Their tactics are more insidious and subtle than we would imagine.

Shelby: I know you have met with survivors of online sexual exploitation to better understand this issue and that some of them watched the film. What resonated with them in the film and what did not?

Vanessa: Showing the film to survivors was probably the thing we were most nervous about. It really mattered to us that it felt correctly represented. There was a terrific response, which touched us so much. The emotions that the characters were feeling, the denial, the guilt, the loneliness, the lack of control, it all resonated so much with them. They told us that the film did a great job of capturing what really happens. The only thing that sadly felt untrue to them was the police response. In our film, the police arrive on the scene right away and automatically believe the survivor rather than the perpetrator. All of the survivors we spoke to did not have that experience. That revelation shook us to our core and needs to be discussed more. People, adults and children alike, will not speak up about injustice if they don't think they will believed.

Shelby: What do you think can people can do about this issue?

Laura: Well, first and foremost, people can make themselves aware and educated about this issue. That’s our first goal with the movie -we want people to become aware of how important and relevant this issue is. Online sexual exploitation happens daily on the online platforms we use regularly. After awareness and education, it’s about helping survivors and preventing people from becoming victims. Whether that’s people you don’t know, people you do know, or even yourselves, it’s important to know and be on the lookout for signs of online sexual exploitation.

Shelby: How did you find out about Equality Now?

Vanessa: Laura actually was asked to participate in one of EN's galas many years ago. She read a monologue that was based upon a true story of a trafficking survivor. Flash forward to us editing the film. We knew that in order to tell this story accurately and advertise it correctly, we needed a partner. An organization that could educate and reach out to people on a global scale. Our mom immediately thought of Equality Now. She reached out, sent the film, and luckily it resonated with everyone at the organization. We are firm believers that media has the ability to change perception and start conversations. That's what we hope Saving Zoë does, and that is what Equality Now has being doing for years.

Laura: We were, and are still, incredibly grateful to have Equality Now as our partner. This issue is such a sensitive one, so educating ourselves about the issue and how to properly speak about it was very important to us.

Shelby: What do you hope the audience who views this film will learn from it?

Laura: We hope audiences realize how real this issue is. I feel like a bit of a broken record, but I just want to reiterate how dangerously common online sexual exploitation is and how important awareness is. It’s such a tough topic to talk about, but I want families, teenagers, and young adults to be able to discuss its prevalence. We also hope any survivors watching the movie connect with Zoë’s story, and continue to have the strength to heal from their experiences. Zoë felt she had to tackle this issue by herself and didn’t talk to anyone in her life about it, and that’s the part that breaks my heart the most. We just want this movie to open up a conversation that could potentially save lives.

Vanessa: This project is very special to us for so many reasons, but producing it with our Mom gave it a whole new meaning. Obviously, it is a story that we hope resonates with young women; however, we also hope that parents can sit with their children, watch the film, and feel compelled to discuss this difficult topic together as a result. This isn't only a teenage girl's story. It's a story that affects all of us. Online sexual exploitation is real. It's happening. And the only way we can stop it is by not being afraid to speak up.

Echo and Zoë are sisters who couldn't be more different. One year after Zoë's murder, Echo unexpectedly discovers Zoë's diary and Echo begins a quest for the truth.

Echo finds herself sucked into her sister’s world and uncovers how small decisions can lead to tragic consequences.

Saving Zoë is a powerful and thought provoking film that explores the dark realities of sex trafficking and sexual exploitation, including how the internet provides a ready marketplace for girls’ bodies. The film shows yet another version of the pervasiveness of sexual exploitation and violence in a way that is current and many will find relatable. 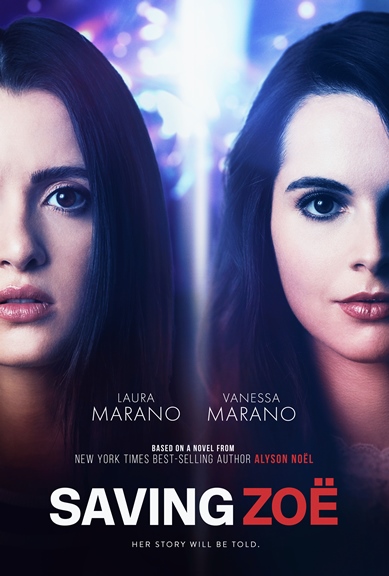 The themes of sexual exploitation and online sex trafficking touched on in the film Saving Zoë are some of the issues that Equality Now tackles every day.

Even more than raising awareness of these issues, Saving Zoë gives them urgency and relevance to a broad and new young audience that is faced with the challenge of safely navigating the online world everyday. People are realizing that the things are not just happening in unknown places far away but are also actually happening right here, right now, in their own homes and communities and to girls just like them.

Saving Zoë shows us in a compelling format, why governments, civil society, tech companies and activists need to work together to ensure the online safety of women and girls.

We have the opportunity to leverage the film as a unique platform to increase awareness of sexual exploitation and inspire fans to join the fight.