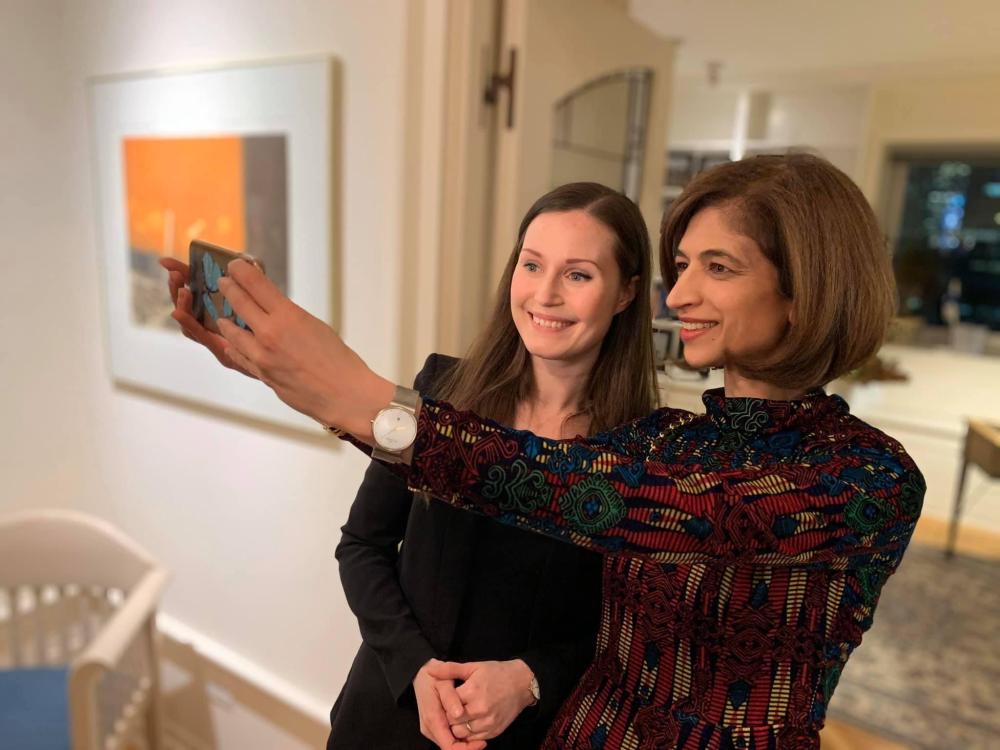 As Yasmeen Hassan steps down as Global Executive Director of Equality Now after ten years in the role, we take a look back at her remarkable life and career to find out what inspired, motivated, and maintained her enduring dedication to women’s rights.

Yasmeen Hassan grew up under a government intent on stripping away women’s rights. “I always knew that women were not equal to men; that boys were celebrated more than girls; that expectations and opportunities were different,” she says. At ten years old, she watched her mother and aunts take to the streets in protest against the increasing ‘Islamization’ of Pakistani law, whereby women were treated as second-class citizens.

“It felt viscerally wrong,” she says. “I wondered how a country like this could treat people like her as half a citizen. I realized that if your government doesn’t see you as equal, then neither will society. I decided right then what I wanted to do with my life.”

It was this profound sense of right and wrong, combined with a deep curiosity and steely determination, that led Yasmeen to the US to study feminism and Islam and ultimately, to qualify as a lawyer at Harvard Law School. When an article about her final-year dissertation on violence against women in Pakistan was published in the early 1990s, it led to a serendipitous meeting with the founders of a small, grass-roots collective: Equality Now.

Formed around the simple premise that women’s rights are human rights, Equality Now was founded by a group of female lawyers and activists with whom Yasmeen deeply connected. “It was a real meeting of minds,” she explains. “We had some long conversations about the importance of bringing women together on issues where the only solution is a global one. It was exactly what I’d been saying for so long! From the very first day, I was all in.”

Over the following years, Yasmeen volunteered with Equality Now on a wide range of legal campaigns, from the Bosnian rape trials in 1993 to a landmark report on sex discriminatory laws in 1999. Meanwhile, her career in corporate law was flourishing. Soon her professional experience, combined with her deep knowledge of the intricacies of Islamic law, led her to a job with the UN in Afghanistan, helping to rebuild the legal system in a post-Taliban administration.

It was a period of intense learning for Yasmeen, providing valuable insight into the challenges of approaching international development from the top down. “I saw how that kind of approach can work in the short term,” she says. “But I also saw how change isn’t sustainable if you don’t speak to the people on the ground.”

She was determined to do things differently. So when, in 2008, the founders of Equality Now approached her to take on a new role as their Director of Programs, she jumped at the chance. “They needed someone to pull the various strands of work together,” she explains. Over the next four years, Yasmeen used her corporate experience to streamline the way programs were delivered at Equality Now. Her approach was a successful one, eventually leading to the award in 2012 of a significant strategic planning grant.

Around this time Yasmeen was approached once again – this time to lead the whole organization as its Global Executive Director. “I was adamant at first that I was not the right person for the role,” says Yasmeen. “I told them that I had zero experience leading an NGO and felt totally underqualified! But they insisted that they needed someone who knew the organization and that it would only be for a year or so.”

Despite her initial reluctance, Yasmeen quickly found her stride at the helm. She continued to build on the success of the previous years of the four program areas that remain at the heart of Equality Now to this day.

Over the next ten years, the organization went from strength to strength, with exponential growth in the global capacity and impact of its program, communications, and fundraising teams.

A catalyst for change

One of the most striking things about Yasmeen is her absolute lack of ego about the success of Equality Now. She sees her role as a catalyst rather than an engine, saying that she had always planned to hand the reins of the organization over when the time was right. “I certainly didn’t expect to be here ten years later!” she laughs.

When Covid struck in 2020, Yasmeen knew that the scale and depth of the effects of the pandemic on not only the NGO sector itself but on women’s rights around the globe, had the potential to be catastrophic. There was no question about whether she would stay and help Equality Now to weather the storm. “I genuinely thought we could go under,” she says.

But with the pandemic precipitating such a drastic global rollback of women’s rights, the work of Equality Now was more crucial than ever. “We had to become extremely adaptable,” Yasmeen explains. “We restructured the entire organization to expand and contract depending on what funding was available.”

Despite the challenges of the past two years, Yasmeen remains optimistic about the impact of being forced to become more dynamic. “We’ve emerged stronger than ever before,” she says. “We’ve had time to do things differently, to reflect, to think about our next steps.”

It was in considering these next steps that the team at Equality Now were inspired to create the three pillars at the core of their latest strategic refresh: Globalize, Galvanize and Lead. Based on insights gathered during an extensive period of consultation with staff and wider partners, these pillars represent the ambition and direction of the whole organization. “They encapsulate what we do at Equality Now, which is to support, strengthen, and amplify women’s voices everywhere,” says Yasmeen.

The first of the three pillars, Globalize, is about bringing programs together around the world to strengthen women’s rights. “This is not just about Equality Now,” says Yasmeen. “We want to lead with a vision; support movements to create systematic change. Our Campaign for Equality In the Family is a good example of how we can work with partners to collectively challenge something structural – in this case, the use of religion and tradition to curtail women’s rights.”

Yasmeen explains that this kind of global approach is the only way to tackle some of the emerging threats to women. “We’re looking now at digital rights,” she says. “How can we work together to make this digital world, created by and for men, more equal for women?”

The second pillar, Galvanize, is a recognition that change needs to come from society as well as from lawmakers. “The women’s rights movement is not just about the law,” says Yasmeen. “Law is the essential first step, but we also need to change hearts and minds.”

The idea that real change requires engagement between those with conflicting ideas is often a difficult one to accept. “People have such different ideas based on where they are and the walk of life they come from,” says Yasmeen. “We need to speak to ‘difficult audiences’, not just those who agree with us. And we need to talk to them in a way they will respond to.”

The final pillar, Lead, describes the value of inward investment to create a strong, stable organization. “We have moved mountains with very few resources over the past 30 years,” says Yasmeen. “Equality Now has become a standard-bearer in the women’s rights space, which is a big responsibility; we need to equip our staff to be the best they can be.”

Looking ahead, it’s easy to be disheartened at the scale of the challenge that remains for those advocating for women’s rights. But Yasmeen dismisses the idea that slow progress is no progress. “There have been huge changes for women’s rights in recent years,” she says. “Look how many laws have changed around the world, against domestic violence, against sex trafficking, against FGM. Have these translated into everything being fixed? No, because it doesn’t work like that. A law against murder doesn’t mean there’s no more murder.”

Yasmeen is, however, concerned about the effects of the rise of populism in breaking down our global understanding of human rights. With populist movements increasingly gaining traction by ignoring or rejecting the international human rights framework, she acknowledges that a global climate of support for such fundamental rights is no longer a given: “We have to adapt to that changing landscape; to find those fault lines where we can still make progress.”

It was in looking for these ‘fault lines’ that Yasmeen found her gaze increasingly drawn back to Pakistan, where it all started for her. “The influence of Islamic hardliners is increasing in Pakistan at an alarming rate,” she says. “Religion and tradition are being used once again to strip back women’s rights. There is hope, especially in young women, but change is not happening fast enough. The majority of activism is taking place in urban areas rather than in the rural areas where it’s most needed, and we’re seeing campaigners struggling to be taken seriously.”

With these changing landscapes in mind, Yasmeen wants to continue (after taking time off to “decompress” she says) to use her expertise to advocate for women’s rights, including in Pakistan. “I’ll also remain part of the Equality Now family. I’ll be on hand for the organization and the new Global Executive Director to advise them as and when they require.”

There is a sense in Yasmeen’s words of hope, of optimism; a fundamental belief in the natural capacity of people to overcome hatred and inequality through collaboration and dialogue. But she is under no illusion that change comes without its challenges. “Sometimes I don’t like the way the world is, but I’ve realized I have to be part of it,” she explains. “It’s a calling – you see that something is so wrong, you just have to change it. It seems daunting, but you pick one thing that you can’t stomach, and then you do something about it.”

Yasmeen’s confidence that change is possible is grounded by a tangible thread of progress connecting the women in her own family. “My grandmother was educated to the fifth grade, then was married in her teens. Her daughter – my mother – became a lawyer after she was married. I studied law and defied expectations about arranged marriage. And my 10-year-old niece – she looks at the world very differently. That trajectory, where young women don’t have the same concerns that other generations had – that’s how you measure progress.”

In dedicating her life to furthering this trajectory of progress for millions of women and girls around the world, Yasmeen has had to make some difficult decisions. She acknowledges that this has involved considerable personal sacrifices at times. “But if I could speak to my ten-year-old self now, I would still tell her to go for it, because I wouldn’t have done anything differently,” she says. “I can’t think of any way I would have rather spent my life.”