6 LGBTQ+ activists you should know about this Pride month

All people, regardless of sexual orientation or gender identity, should have equal rights and be able to live free from harm, coercion, or discrimination.

To celebrate Pride Month, we're highlighting some incredible activists past and present working for LGBTQ+ rights.

South African lesbian activist Beverly Palesa Ditsie, spoke about the importance of LGBT rights in the context of human rights at the 4th UN World Conference on Women in Beijing in 1995. Not only was she was the first openly lesbian woman to address the UN, but it was also the first time that the United Nations was openly addressed about LGBT issues.

“If the world conference on women is to address the concerns of all women, it must similarly recognize that discrimination based on sexual orientation is a violation of basic human rights.” 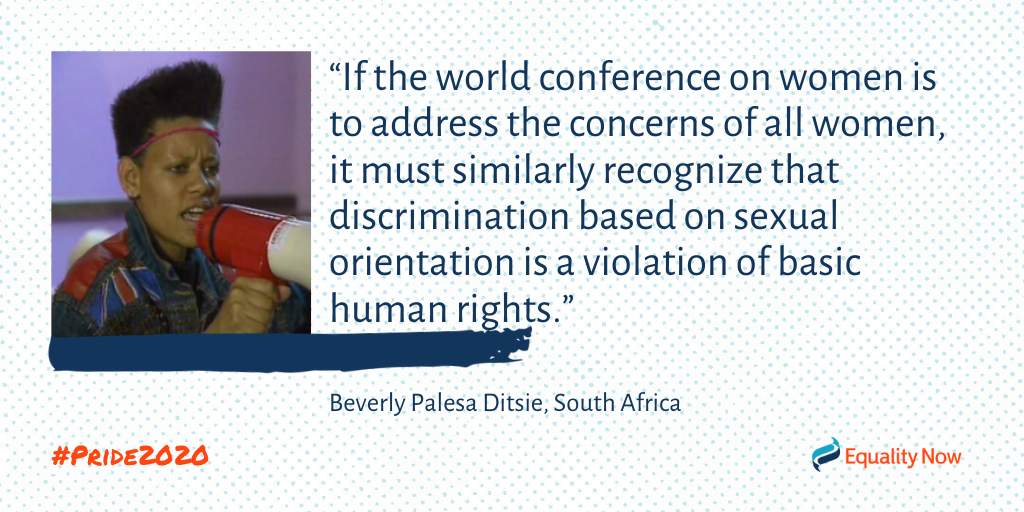 Chilean lesbian activist Érika Montecinos is the founder of Agrupación LésBIca Rompiendo el Silencio (Breaking the Silence LesBIan Association), which advocates for the rights of cis and trans women who identify as lesbian or bisexual.

“Women are taught to be ashamed of our sexuality. And those of us who identify as lesbian, bi, or diverse, can’t say it, because there is greater pressure on women regarding the obligations we have to society.” 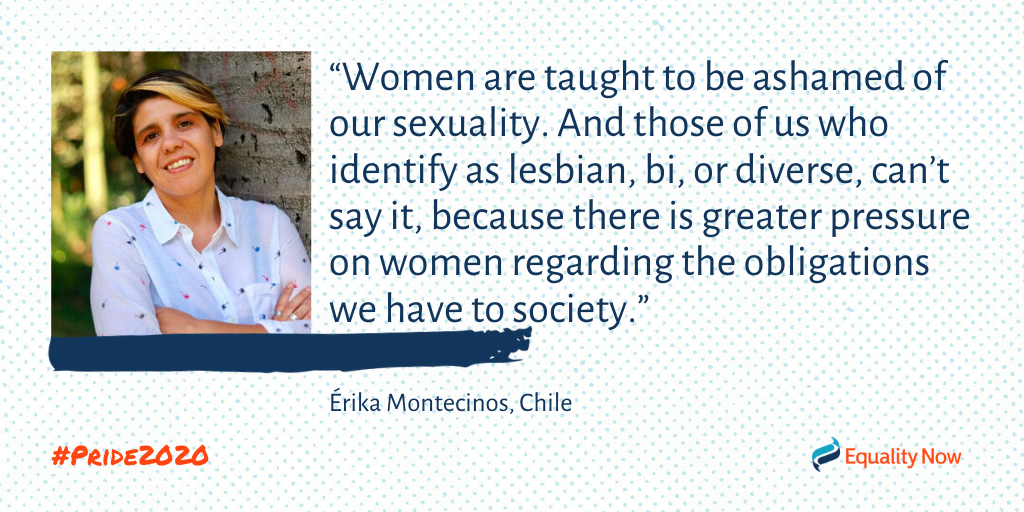 Marsha P. Johnson was an American trans activist, widely credited with starting the Stonewall uprising. Johnson played an active role in street activism with ACT UP throughout the 1980s. When, in 1992, George Segal's Stonewall memorial was moved to Christopher Street from Ohio to recognize the gay liberation movement, Johnson commented,

"How many people have died for these two little statues to be put in the park to recognize gay people? How many years does it take for people to see that we're all brothers and sisters and human beings in the human race?." 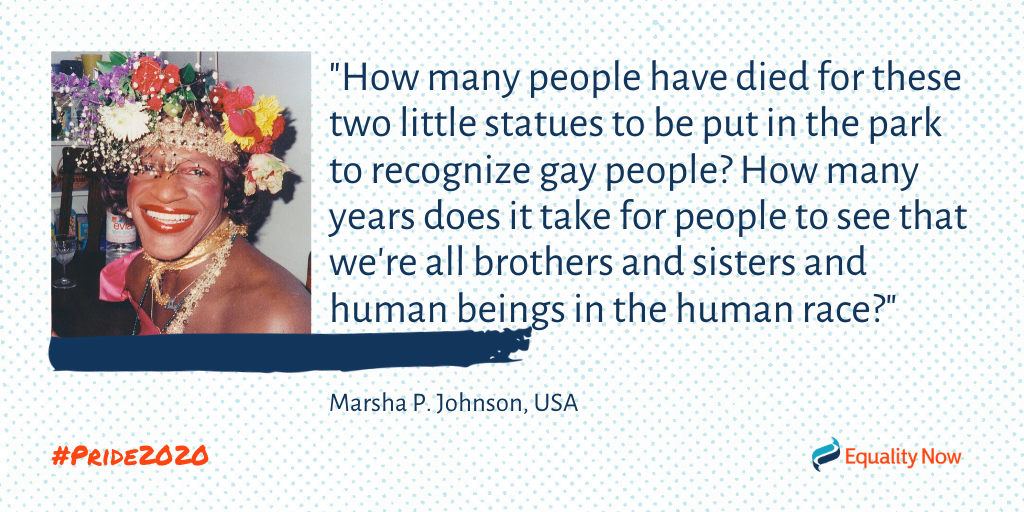 Lawyers Menaka Guruswamy & Arundhati Katju argued for the decriminalization of homosexuality in India, resulting in the unanimous Supreme Court decision to repeal Section 377 in 2018. The couple were honored in Time’s 100 most influential people in 2019, with Priyanka Chopra writing:

"Arundhati and Menaka have helped take a giant step for LGBTQ rights in the world's largest democracy. In their committed fight for justice, they have shown us that we as a society must continue to make progress, even after laws are changed, and that we must make an effort to understand, accept and love." 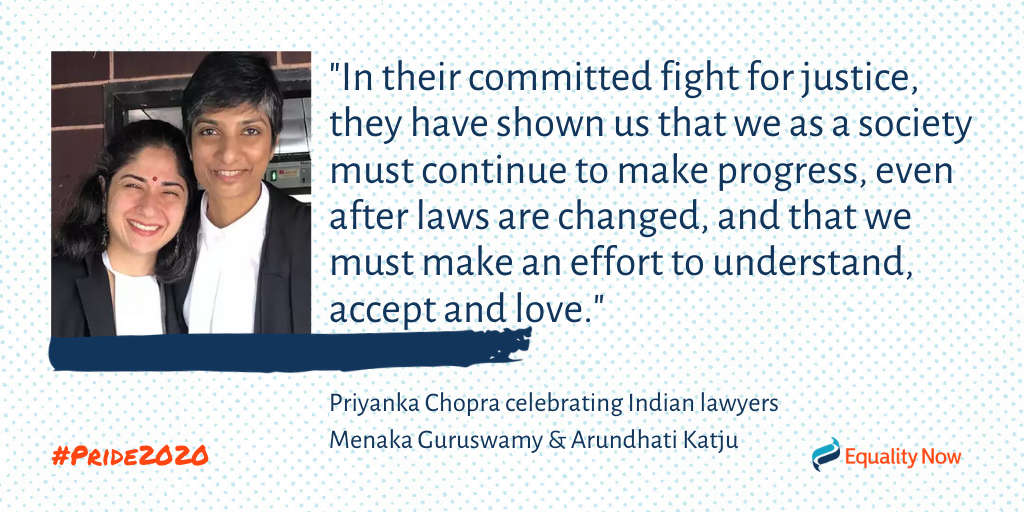 American LGBTQ+ rights activist Urvashi Vaid, works for an inclusive LGBTQ+ movement, one that encompasses everyone regardless of race, class, ethnicity, age, or ability. Her book, Irresistible Revolution: Confronting Race, Class and the Assumptions of LGBT Politics, was released in 2012. Vaid hopes that LGBTQ+ community will accomplish two things:

"One is to take care of the parts of our community that are less powerful. That means low-income LGBT people, transgender people, and our community's women, whose rights are getting the crap kicked out of them, parts of our community across the board -- kids, old gay people...The second thing I would love to see happen is for the LGBT community to use its political power and access to create a more just society for all." 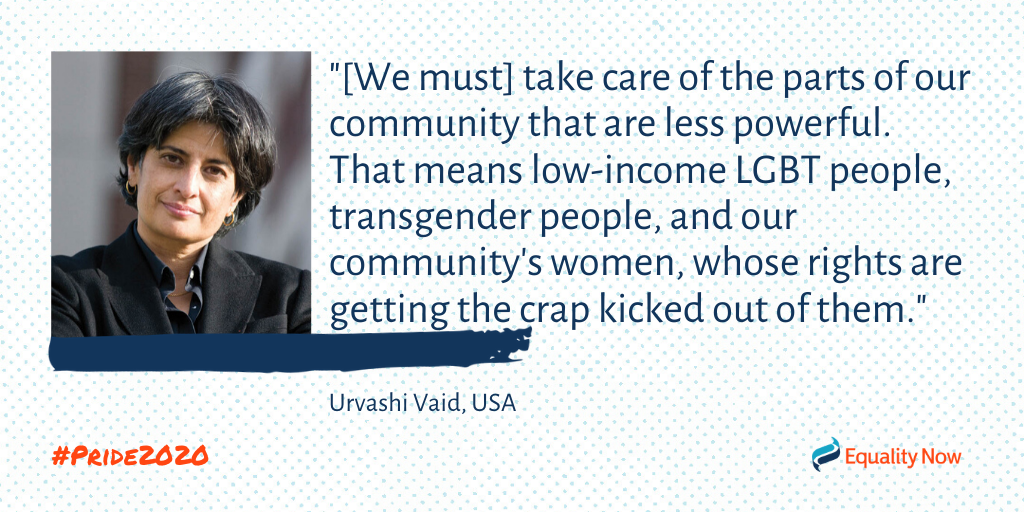 Read our Pride month edition of Equality Now Recommends, full of books, movies, TV shows, and podcasts, that act as a megaphone for LGBTQ+ rights.

As we all prepare for an unconventional holiday season, many...

We’re back with the October edition of Equality Now Recommends...