Legislation alone will not end the exploitation of women and girls in the United States.

The internet has enabled sex trafficking to become the fastest growing criminal enterprise in the world, worth a staggering $99 billion a year. This expansion correlates directly with the increasing use of digital platforms to sell people online, because like any other “successful” business, sex traffickers rely on marketing and communication tools to ensure a steady cycle of demand and supply.

Tragically, this industry boom is being fueled by an astronomical growth in child sex trafficking. Between 2010 and 2015, the National Center for Missing and Exploited Children’s CyberTipline received an 846% increase in the number of suspected cases reported, and the US Department of Justice has said that more than half of sex-trafficking victims are 17 years old or younger.

“Adult” sections on mainstream classified websites normalize easy, anonymous ways for traffickers and pimps to recruit, market and deliver women and children as commodities for sexual exploitation. Posting an online ad is quick, cheap and simple, and victims can be repeatedly bought and sold for large sums of money at relatively low risk. Traffickers are able to advertise in multiple locations, test out new markets, locate customers and transport victims to meet buyers while avoiding detection by authorities.

Meanwhile, the transitory nature of online sex trafficking makes it for harder for law enforcement to locate victims, pimps and buyers; identify essential witnesses and evidence; and share information and intelligence across jurisdictions.

In April, Congress passed FOSTA, a groundbreaking law that interrupts this cycle of abuse by holding internet companies accountable when they knowingly facilitate sex trafficking. An abbreviation for Allow States and Victims to Fight Online Sex Trafficking Act of 2017, FOSTA shrinks the online commercial sex market and opens up legal avenues for prosecutors and victims to take steps against social networks, websites and online advertisers that have failed to act sufficiently against users who post exploitative content.

However, not everyone is happy with FOSTA. Some have raised concerns that it will force online platforms to police their users’ speech. There’s even a lawsuit pending against the legislation. The plaintiffs, represented by the Electronic Frontier Foundation (EFF), a nonprofit that is funded in part by Google, call FOSTA an “unconstitutional Internet censorship law.”

FOSTA is a very narrowly tailored law that specifically holds anyone who knowingly facilitates and supports sex trafficking online liable. It doesn’t cast a wide net over all internet activity — that kind of approach would be impossible. Industry giants like Oracle, IBM, Disney, 20th Century Fox and Hewlett Packard backed the bill because they realize technology can be used for good and bad and we shouldn’t leave it undefended against criminals. 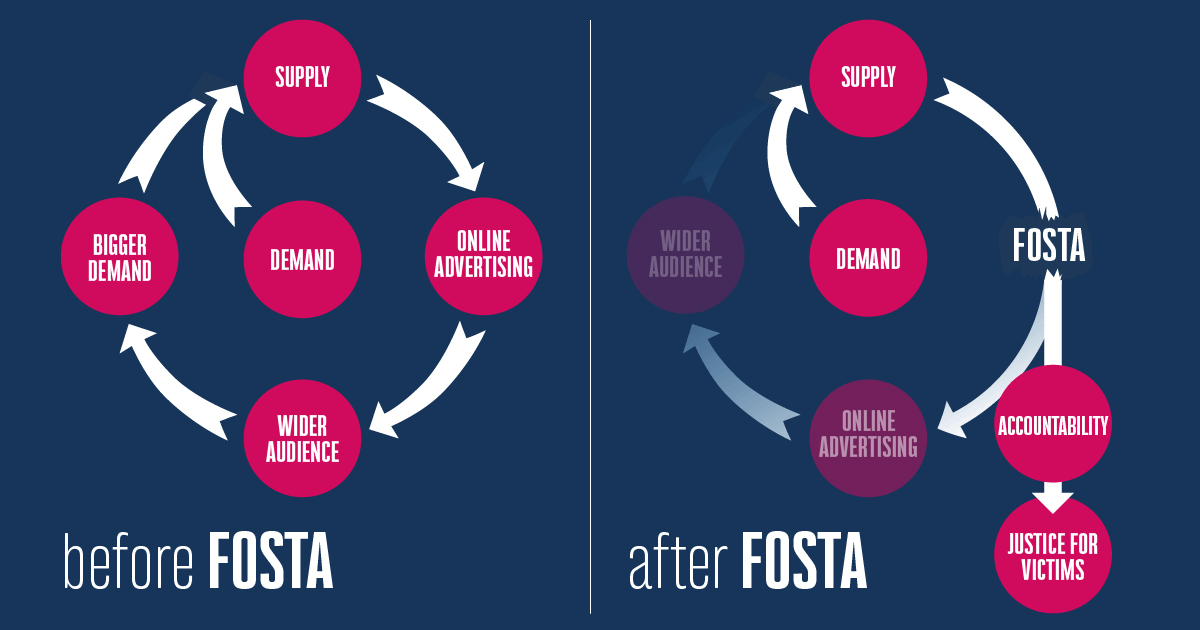 Sheryl Sandberg, Facebook’s chief operating officer, supported FOSTA saying, “We all have a responsibility to do our part to fight this,” and that we should “allow responsible companies to continue fighting sex trafficking while giving victims the chance to seek justice against companies that knowingly facilitate such abhorrent acts.” Others have said that without sites like Backpage.com, women who choose to be in prostitution have fewer tools to screen potential “johns” and, as a result, are left vulnerable. But FOSTA does not target the adult services sector nor individuals — it explicitly targets tech companies.

Backpage was involved in 73% of all child trafficking cases reported to the National Center for Missing and Exploited Children (excluding reports made by Backpage itself). Before FOSTA, victims who were trafficked via the website were repeatedly prevented from getting justice through the courts — even in cases when Backpage knew of or participated in posting advertisements for sex from minors.

What survivors and activists knew to be true for years was finally confirmed by federal investigators when Backpage CEO Carl Ferrer admitted the website went so far as to assist advertisers in wording their ads so they didn’t overtly declare that sex with minors was for sale. Flagged keywords associated with trafficking — such as “Lolita,” “rape,” amber alert” and “teenage” — were deleted to conceal the true nature of the ads before they were published online.

The site, which was finally shut down in April 2018, may have been described as a “tool” for some but, in reality, it was overwhelmingly being used as a platform for commercial sexual exploitation — earning around $7 per ad. A Senate report found that around 93% of Backpage.com’s revenue — estimated at $150 million in 2016 — was from “adult services” ads.

While FOSTA is a monumental law, it alone will not end the exploitation of women and girls in the United States. We have to address this cycle of abuse at the beginning — and that means ending demand.

Legal rights organization Equality Now is working alongside survivors of commercial sexual exploitation, women and children’s rights organizations, policymakers and law enforcement officials to tackle the root causes of sex trafficking. This involves criminalizing those who exploit people for profit, including sex buyers, traffickers, pimps and brothel-keepers, and decriminalizing people in prostitution, including victims of trafficking, and providing them with much needed support services.

If we are going to make a dent in triple-digit percentage increases, we have to follow the money and hold those at the helm accountable. This is what FOSTA was made for.

July 30 marks World Day against Trafficking in Persons. Stand up for victims of online sex trafficking and together we can ensure the internet is no longer a tool for exploitation.

Learn more about FOSTA and take a stand against sex trafficking

This was originally published in Fair Observer on 30 July 2018 by Romina Canessa.

#30DaystoAct: Joint statement on detention changes in the UK

Joint statement regarding changes to the detention of vulnerable people,...