Born on the border between Kenya and Tanzania, Caroline*, 13, shared her story with us:
“My mother put me through FGM when I was only seven years old. One weekend, a lady came to visit. I was not informed. I bled so much I fainted.

“I had not heard about FGM before, and I didn’t know what was happening. Nobody explained.

“When they did what they did, I hated my mother and the circumciser, but I didn’t know what to do about it. I didn’t realise it would be the end of my schooling.

“Then my mother told me, ‘Now that you have become a woman, I have nothing to feed you, so you will be married. You have to respect him and do whatever he tells you.’ He was 60. It was then I made the connection: my mother cut me when I was seven so I could be married to an old man.

“The following day I left to Narok. I had heard on the radio about girls who were rescued from FGM there. If I had not left, I would have been in the village with that old man, four kids, and living in poverty.”

“The dreams of girls are cut short when they are married and can’t take on the responsibility of being wives and parents at such a young age. Their lives are ruined, especially when they get pregnant.

"It is violating their human rights. We need to stop FGM with immediate effect and to put a law in place banning cutting.

"That is my message to the world: They should not harm girls in any way.”

So what are the current laws on child marriage and FGM in Kenya?

Both FGM and ‘child marriage’ have been illegal in Kenya since the Children’s Act, 2001, which protects children against these harmful practices. Further laws such as the Sexual Offences Act, 2006, the Prohibition Of Female Genital Mutilation Act, 2011 and the Marriage Act, 2014, which sets the age of marriage at 18 years, also protect girls from these practices.

Through these laws, the government acknowledges both practices have a harmful effect on the rights of women and girls. However, both practices remain common with prevalence of ‘child marriage’ at 23% and FGM at 21%.

How are these laws implemented and what can be improved?

The remaining challenge is the implementation of these progressive laws. Many offenders are not prosecuted as required, due to cultural practices, with some instances where victims were even required to marry perpetrators.The laws need to be effectively implemented and support networks for girls at risk need to be further developed.

To this end, Equality Now has engaged with law enforcement agents, government departments and the National Gender and Equality Commission to improve their ability to hold perpetrators accountable.

How to access support if you are at risk of ‘child marriage’ or FGM in Kenya?

If you, or someone you know, is at risk of ‘child marriage’ or FGM call Kenya National Council for Children’s Services toll free on 116 to access support and connect to law enforcement.

If you are in Kenya and want to receive action alerts from Equality Now text GIRL to 22168**. 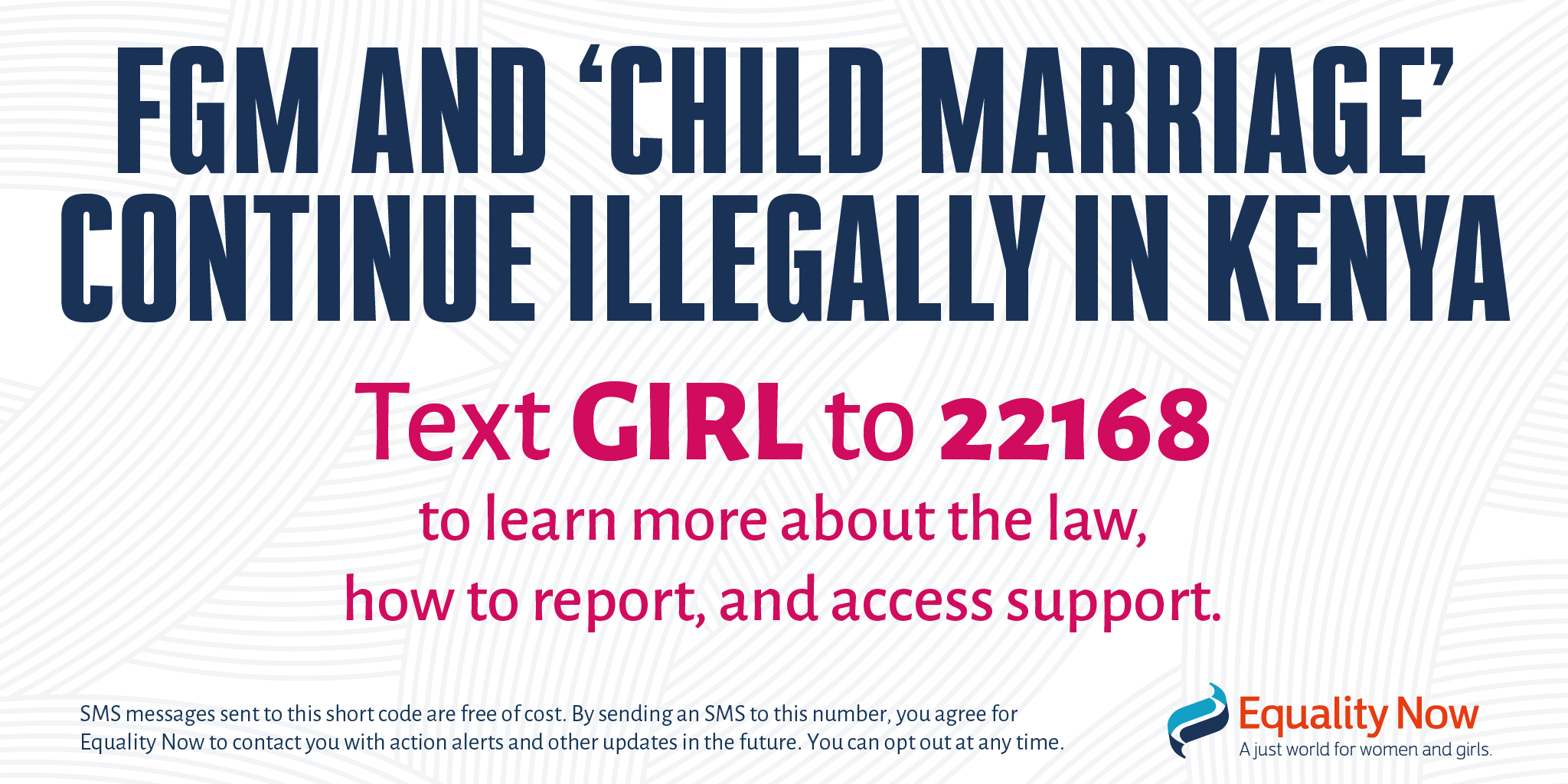 *Name has been changed.
**SMS messages sent to this short code are free of cost. By sending an SMS to this number, you agree for Equality Now to contact you with action alerts and other updates in the future. You can opt out at any time.

In its 44th session, the UN Human Rights Council has...

Female genital mutilation is a global problem and one which...