In May 2020 Equality Now Board Member, Patricia Amira, sat down (virtually) with award-winning author and foreign correspondent, Christina Lamb to discuss women in conflict situations, her life as a foreign correspondent, and her most recent book, Our Bodies, Their Battlefields: War Through the Lives of Women.

What prompted your choice to be a war correspondent?

One of my first assignments was at The Financial Times to interview Benazir Bhutto while she was in exile and the day I went to interview her was the day she announced her engagement to Asif Alir Zardari. She then went back to Pakistan and I went to work for a TV company and one day, when I came home from work, on my doormat was the most beautiful gold engraved wedding invitation to Benazir’s wedding in Pakistan. So of course, I went!

It was my first visit to Pakistan and every evening after the ceremonial events there would be these meetings with all her political colleagues about how to topple the military dictator. So all these people were telling me about their experiences being arrested, tortured, and tear-gassed in order to bring democracy to their country, which was something I had always taken for granted.

After that, I was fascinated and didn’t want to go back to my TV job, so I gave my notice and went off to live in Pakistan and start covering international issues.

As a female war correspondent, you’re in a small group – how do you think you’ve influenced how conflict is reported? and from that what difference do you think you make to the lives of the people whose lives you have written about?

I wouldn’t like to assume that I really made any difference to how war reporting is done. I mean I was very much influenced by people like Martha Gelhorn or Lee Miller, who were in this work when there were very few female correspondents.

But I have found and I don’t think I do this consciously, but I always speak more to the women. I was never very interested in what we call the “Bang bang”, the fighting of war. But I am completely fascinated by how you live in that situation when all hell is breaking loose around you. How do you keep life together? How do you educate your children and feed them or look after the elderly? Because it is usually the women that are doing that and to me, they’re the real heroes.

Maybe because I’ve been in many difficult situations over the years and I’ve seen the resilience that people actually do have when they are in these situations, it has made me more confident that we will get through this current situation.

Tell us about your latest book, Our Bodies, Their Battlefield: What World Does to Women

It is about the use of sexual violence as a weapon in conflict and how difficult it is to get justice. It’s trying to tell the stories of women in war that often get written out of history but it is also very much focused on the brutality against women. War rape is the most neglected war crime.

Violence as a weapon of power and control over women, in and outside of conflict, is an issue that is overall still not addressed in the way that it should be.  What practical action do you feel needs to happen and by whom, to get to the root of the issue?

In most of the places where I have spoken with women, it is often the women that are castigated and ostracized afterward, so instead of getting support, they are the ones that are forced out of the village. This is why rape is such an effective weapon, it is an easy way to humiliate a society, to destroy families and communities.

The first time I realized the scale of it was when I was speaking to Yazidi girls who were kept as sex slaves by ISIS. One girl I spoke with was passed on 12 times between people as if she was a goat. One of the hardest stories I had ever heard was a 16-year-old girl who was kept as a sex slave by an ISIS judge and she told me the worst night of her life was when he came back with a 10-year-old girl and he raped the 10-year-old girl and she heard the girl crying for her mother all night. This should not be going on at this current time. This is a war crime and these women need justice. We need to be pushing our politicians in our countries to push for justice for women in these places.

Honestly, I could have carried on writing my book forever. It is happening in so many places around the world on such a scale and it is so extremely difficult to get justice. There has not been a single prosecution for any of what happened to the Yazidis, the first case just started. But in Iraq and Nigeria with Boko Haram, the people who have been captured, none of them are being tried for what they did to the Yazidi girls.

Having seen first hand, the complexity of women’s experiences, is there one story that you could tell us about that stands out for you personally? Your yellow flower in a sea of concrete.

What keeps me going is that you do meet the most amazing people doing remarkable things in difficult places. I’ve been lucky enough to work with Malala who risked her life to bring education to children, which shouldn’t really be a controversial thing, in my opinion, but it is.

I also worked with an amazing Syrian girl named Nujeen who has cerebral palsy and had never been to school. She lived in a 5th-floor apartment in Aleppo and there was no elevator so it was difficult for her to get out of her building but she used to watch TV every day and she taught herself English by watching television. Nujeen and her sister managed to get all the way from Aleppo to Germany by themselves. She is just one of these people who makes you feel happier about life and gives me hope.

Is there an emerging conflict you think the world should be watching right now?

I am actually really worried about the world right now because, amidst COVID-19, wars haven’t stopped even though the UN Secretary-General has called for a global ceasefire. In fact in some places, like Afghanistan, there is more fighting with an average of 60-70 attacks a day by the Taliban and in Yemen as well. I am worried that we’re focused so much on what’s happening in our own countries, and of course, I understand why because thousands of people are dying, the economy has been brought to a halt and we don’t really know how we are going to get out of all of this, but things haven’t stopped elsewhere. Also, some people are taking advantage of the situations and knowing that no one is watching and that they can do bad things.

Someone told me just last week that dictators love lockdowns and this is true. People are using it as a way to suppress their opposition, close down journalists, lock up opponents, keep people at home and not able to do anything and so we are seeing more and more countries where autocrats are in power and where they are imposing more. And this is not just happening in “faraway places”, it is happening in Europe. In Hungary for example, Viktor Orban awarded himself emergency powers using the Coronavirus as an excuse and is basically now in complete control.

Do you have any advice or a book or film recommendation for educators who want to help bring these facts regarding sexual violence in conflict to light in the minds of young people?

I’d like them to read my book (laughter). But the fact is, there is not actually that much written on this. There are some good films, The Prosecutors, which follows three prosecutors in the DRC, in Bosnia, and in Colombia all prosecuting cases on this, and The Uncondemned which tells the story of the women in Rwanda who through their tenacity and bravery brought the first-ever conviction of rape as a war crime in the world, only 20 years ago. 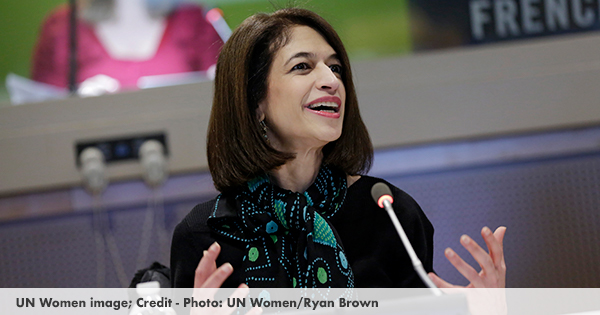