I walk along the streets in Olongapo city where scantily clad women pose outside entertainment clubs and beckon passersby to come inside for a “good time.”  I enter one of the “videoke bars,” and find myself in a dimly lit den where foreign businessmen and locals watch inebriated women gyrate on a stage.

From the bar, I watch a Westerner buy another drink from a young Filipina whose language he does not speak. If the man wants to buy her for sex, he will pay the bar owner a fee called a “bar fine.” Looking at this young girl, I wonder how she ended up here. I wonder if she will take her customer to a back room in the bar or to her home and risk waking up any children she might have. I wonder if she’s ever been beaten or raped by her customers. Or, if she ever had to contact a “ hilot ” (midwife) who terminates unwanted pregnancies by violently pounding a woman’s stomach until she miscarries.

"The sex industry is a huge machine, and it's not easy to stop. As one survivor to another, I try to communicate that I understand their fears and pain"

When the customer leaves to use the bathroom, I approach the girl who looks surprised and a little annoyed that I’ve intruded on her personal space. Undeterred, I tell her that I work for an organization called Buklod. “We bring women together to discuss their lives and share ideas,” I say. “You should come to our next meeting.” She looks at me quizzically and asks, “What do you know about my life?”

In 1984, Olongapo City was a thriving U.S. military base and my name was not Alma but “Pearly.” I was a single-mother of two young children struggling to support my family by waitressing seven days a week. The clubs were always busy when the military ships came in.

As a child I dreamed of becoming an accountant. When my brother promised to help pay my tuition, I left Manila for Olongapo City where he lived. Once I arrived though, he admitted that he had no intention of helping me attend college. Instead, he hoped I would “strike it lucky” and marry an American serviceman so I could support our family. After a few months there, I grew frustrated by the lack of jobs and finally agreed to waitress near the U.S. Naval Base at Subic Bay. My brother tried to force me to accompany the servicemen when they requested my company, but I refused.

One day, a serviceman offered the manager a “bar-fine” for me. I refused, saying that I was just a waitress. The manager told me that if I didn’t go, I would lose my job. He threatened to withhold my transfer documents, papers releasing me from his employment and allowing me to work elsewhere. I was scared that my children and I would end up homeless and hungry, so I reluctantly agreed. The American wanted to rent a hotel room, but I told him to give me the money he would spend on a room and accompany me home instead. I sent my children to my parents because I did not want them to see what their mother was doing to make a living.

I tried to avoid doing this again, but my daughter fell ill and I needed money for her medical expenses. During my four years at the club, I had about 30 American “boyfriends.” In the early 1980s, there were no health programs and nobody knew how to use contraceptives. The Amer-Asian child population boomed. I gave birth to my third child knowing he would never meet his father.

Around that time, we started hearing about AIDS. The American guys would line up for condoms before disembarking their ships. However, some of them would just blow the condoms into balloons and toss them around. We couldn’t require a customer to use a condom because he would say, “I paid good money” and get his way.

In 1984, I befriended an American woman named Brenda Proudfoot, who was helping women escape prostitution and sex trafficking. She invited me to join a support group where I met others in similar situations. After several meetings I knew this was my chance to finally exit the hellish world of prostitution.

In 1987, I co-founded Buklod ng Kababaihan and spoke with women at the bars about our services. My employer grew frustrated with my absences, but I felt so empowered that I continued speaking out against injustices at work. I now knew my rights as a woman and a human being, and was unwilling to compromise any longer. My employer fired me, calling me “a Communist.” I was unable to find another job because he withheld my transfer permit, but thankfully, Buklod hired me as an organizer. The salary was low, but I jumped at the opportunity. I was so happy to be free from prostitution.

Society’s understanding of human trafficking and prostitution needs to change. In my country, people believe that prostitutes are criminals and buyers are the victims. This is wrong. When women are not given equal opportunities for employment or education, their options are limited and they grow desperate. Because women are often viewed as powerless sex objects they are constantly driven into the sex industry. At times, I too believed that I only existed for men’s pleasure. Filipina women are often referred to as “little brown fucking machines” by servicemen.

Once I asked a customer, “Why do you like Filipina women so much?” He replied, “Because the women are cheap, way cheaper than Japanese women. And besides, you can do what you like. Here the women are always smiling. They pretend that they like it.” We need to change this thinking and educate young girls about the abuses of the sex industry, to let them know that they do have choices. Women are human beings, not commodities to be bought and sold.

As I leave the videoke bar, I’m unsure if the young woman will attend our next meeting. She is one of thousands of prostituted Filipina women. The sex industry is a huge machine, and it’s not easy to stop. As one survivor to another, I try to communicate that I understand their fears and pain. I try to tell my sisters that Buklod is trying to create a different future. 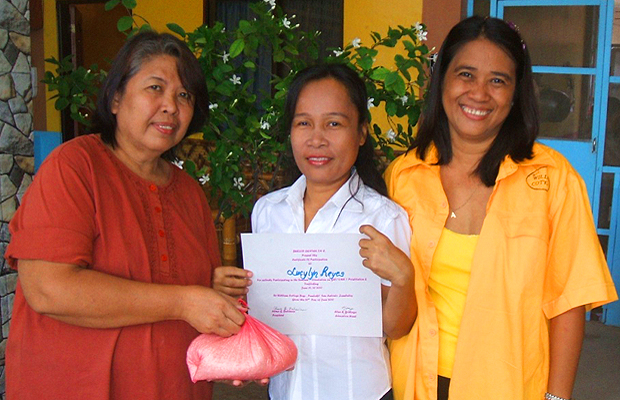 Alma, on right, with Buklod's Vice President (left) and a program participant (middle).Photo courtesy of Buklod.

I grew up in a middle class subdivision in western...

Lilly, who suffered a turbulent and abusive childhood, was introduced...

What is the scale of trafficking for sexual exploitation in the UK?