The State We're In - Equality Now

The State We're In

If everyone is able to pass on their nationality and all its benefits to their children and spouse, families, communities and economies will be stronger. That’s the future we’re fighting for.

A quarter of the world’s governments deny women equal nationality rights, preventing women from passing on, acquiring, changing, or keeping their nationality on an equal basis with men. Equality Now's updated report (Jan 2016) calls on the 53 nations that deny women equal rights to citizenship to change their discriminatory laws.

CAMPAIGNING FOR EQUAL RIGHTS FOR CITIZENSHIP

Equality Now is a co-founder and Steering Committee member for the Global Campaign for Equal Nationality Rights, a coalition advocating for international action to reform laws in countries where women are prevented from passing their nationality to their children or spouses on an equal basis with men. With our partners in the campaign, we raise awareness about nationality rights, publicize research and advocate for law reform.

Born and raised in Lebanon to a Lebanese mother, Nour was married off at age 15 to her father's relative in Egypt. Since she is not entitled to her mother's Lebanese citizenship, her parents were scared that she would not be able to remain in Lebanon as an adult, or have access to the education or work that she would be entitled to if her mother’s nationality were recognized.

Shireen is not allowed to register her Jordanian-born children on her Jordanian passport because their father is from another country. She has a troubled marriage and is terrified that her husband will take the children back to his country, leaving her with few and arduous options to get them back. She, too, thinks of marrying off her daughter early in order to give her the sense of security that she herself lacks.

Haitian-born Maxime lives in the Bahamas and is married to a Bahamian woman. Together, they had two Bahamian-born children. After losing his work sponsorship, Maxime couldn’t work legally and was threatened with deportation. He and his wife have faced incredible obstacles while trying to keep their family together, all because Maxime’s wife can’t pass her nationality to her spouse.

Had Nour’s father been Lebanese, and Shireen’s husband Jordanian, their children would have had an automatic right to citizenship. Had Maxime been able to acquire his wife’s nationality when they married, he would have been more secure. All three would not face the serious consequences-- such as deportation or "child marriage"-- that can result from discriminatory nationality laws. 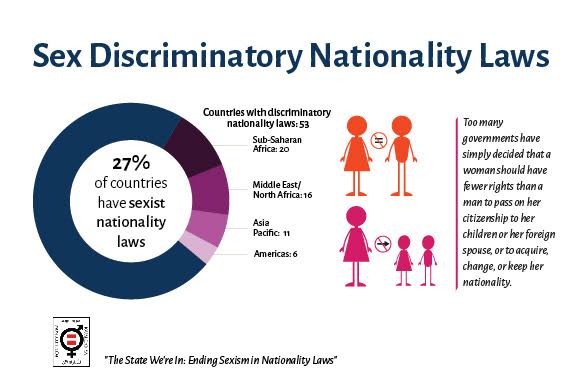 Graphic on sexist nationality laws. FULL INFOGRAPHIC HERE.
Your voice can help Nour in Lebanon, Shireen in Jordan, Maxime in the Bahamas and families in the 53 countries where we’re advocating for equal nationality laws. The laws themselves can be complex, but the solution is very simple: immediate legal reform.

Since 2013, there has been significant progress, both in terms of the amendment of discriminatory laws at the national level and the growing global movement to end discriminatory nationality laws.

A number of countries have either removed, or taken steps to address, discriminatory provisions within their nationality laws.

Sex and the citizenry: the global laws that leave women and children in limbo (The Guardian)