Our Board in memoriam 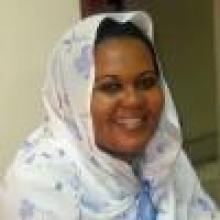 It is with great sorrow that we share the passing of inspirational women’s rights activist Dr. Sidiga Washi, who served as Chairperson of Equality Now’s Board of Trustees, and acted as Treasurer of our Africa Board.

Born in Sudan in 1955, Dr. Washi was a Professor at the Department of Nutrition and Health at United Arab Emirates University. She was also Professor of Family and Consumer Sciences/Community Nutrition and Professor of the Nutrition Center for Training and Research at Ahfad University for Women in Sudan, where she also formerly served as Dean of the School of Family/Health Sciences.

An internationally renowned expert in population, reproductive health and nutrition, Dr. Washi published over 20 journal articles, a book on therapeutic nutrition, and many other influential academic works. She also presented at numerous regional and international conferences on women rights, speaking out about violence against women, gender equality and the role of women in peace and development.

Dr. Washi received her PhD from Iowa State University, majoring in family and consumer sciences education with an emphasis on nutrition. Following graduation, she trained as a “Leader in the New World” at the Kennedy School of Government at Harvard, where she developed skills she used throughout her life as a leading voice in international development.

She led numerous nutrition projects, supervised many graduate students, and oversaw research on gender disparities in nutrition in Sudan.

In addition, Dr. Washi served as chair for multiple Sudanese Women's Organizations and was a Board advisor for the Strategic Initiative for Women in the Horn of Africa (SIHA Network).

For her contributions to the advancement of women in Sudan she was awarded the Glenn Murphy International Award by the Women’s Club at her alma mater Iowa State University.

On the international stage she served as Vice President for the Africa Region at the International Federation of Home Economics (IFHE) from 2006-2010 and the International Vocational Education and Training Association (IVETA) from 1992-1996. In 2016 she was named the first African president of the IFHE in it’s 108 year history.

Equality Now’s Global Executive Director Yasmeen Hassan said: “Dr. Washi was a most wonderful, warm and giving person and added immensely to our work. I was honored to have had the chance to work closely with her and will miss her greatly.”

Faiza Mohamed, Director of Equality Now’s Africa Office, said: “I have known Dr. Sidiga Washi from the early eighties when we were both studying at Ahfad University College for Women in Omdurman, Sudan. We reconnected and worked together on defending women’s human rights from 2003. Sidiga was a great human being, very caring and committed to promoting and advancing the rights of women. I am very saddened of Sidiga’s sudden death but we want to celebrate her life and contributions to the women’s movement.”