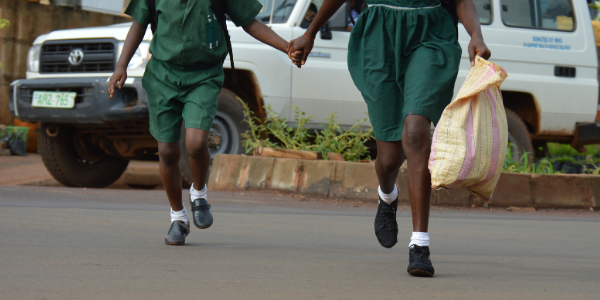 Equality Now Is Working With Partners To End Sexual Violence Against Girls In Sierra Leone.

UPDATE: In March 2020, the government of Sierra Leone finally lifted the discriminatory ban that prohibits pregnant schoolgirls from attending school, effectively heralding the beginning of a remarkable era for adolescent girls.

Editor’s note: This is an excerpt of an article featured on Thomson Reuters Foundation News. Read the entire article here.

The Ebola epidemic helped to bring international attention to the huge amount of sexual violence and exploitation of girls in Sierra Leone. Thousands of pregnant girls returning to education after the crisis found themselves excluded from school – because the government had in effect banned them from attending for being supposedly “negative influences”.

16 year old Samantha was one of these girls. In return for carrying water to his house, her teacher gave her good grades and school supplies. One day, he raped her and she became pregnant. Incredibly, he was allowed to continue to work, while she was expelled. Abusing their positions of trust, some teachers have become predators in Sierra Leone, raping girls or coercing them into sexual acts in exchange for books, school fees or transportation.

Another girl, Jeanne, lost both of her parents to the Ebola epidemic. She hoped that getting an education would be her ticket to a better life. However, “biker boys” demanded sex from her in exchange for bringing her to school. Now 17 years old, Jeanne became pregnant and was devastated to find out that she could no longer attend school or sit public exams. Pregnant girls… are being punished, while their abusers walk free.

Pregnant girls like Samantha and Jeanne are being punished, while their abusers walk free. Equality Now is working with Women Against Violence and Exploitation (WAVES), Women’s Partnership for Justice and Peace (WPJP), Graceland Sierra Leone, Child Welfare Society and the Education for All Coalition – Sierra Leone, to call on the government to immediately lift the ban on pregnant girls attending regular schools and also to ensure that perpetrators of sexual violence against girls are punished.

No girl who finds herself pregnant – and especially after having been sexually violated – should be additionally victimized by being denied an education.

Victory at ECOWAS Court for girls in Sierra Leone