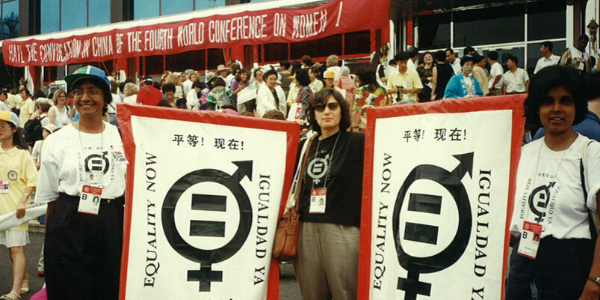 Since 1999, Equality Now has updated Words & Deeds every five years. The report highlights explicitly sex discriminatory laws affecting women and girls and other vulnerable people over the course of their lives that need to be reformed. These include:

This time we are particularly focusing on sex discriminatory family laws, including codified, religious and customary family laws. This area of legal inequality, in matters of marriage, divorce, property rights, inheritance, is one of the remaining blocks to achieving gender equality globally. Religious, cultural and ethnic identity make this a difficult area to address.

What will unlock this complex topic, and indeed the other discriminatory laws detailed in the report, will be collaboration.

2020 will mark the 25th anniversary of the Beijing Declaration and Platform for Action, a progressive blueprint for advancing women’s and girls’ rights.

As part of the anniversary, UN Women, Mexico and France, have created The Generation Equality Forum, which will follow on the heels of the Commission on the Status of Women. The Forum will be  made up of intergenerational and intersectional representatives from civil society, champion governments and the private sector. We anticipate that this will call for action and accountability for the full realization of the gender equality agenda as established in international law. Equality Now is delighted to be serving in this diverse and  forward-looking group.

To establish concrete and transformative actions that Coalition members can take between 2020 – 2025, the Generation Equality Forum is forming Action Coalitions around key thematic issues such as legal equality and violence against women.

An Action Coalition will be a perfect space for a new Global Campaign for Equality in Family Law and our Words and Deeds report (the content of which was crowdsourced from over 50 organizations and individuals) to live.

Just last week we participated in the exciting Beijing +25 Prep meetings in Africa and Europe and looking forward to contributing to other regional meetings.

I hope, in a period of time when progressive values are under sustained attack and the human rights sector under continued pressure, The Generation Equality Forum, (and our report!) will  play its part in stopping the backsliding on women’s rights and promote the protection of the most vulnerable.

When we work together, we do better.

Only with an inclusive and collaborative approach, with a wide range of people from feminists, to faith leaders to activists, and service providers, all actively listening to each other and working together, can we reinforce existing commitments and move the agenda forward towards greater equality.