Moses Ntenga is the founder and Director of Joy for Children Uganda, NGO that advocates both at the grassroots and on a national level for child rights and seeks to end violence against children through capacity building, activism, psycho-social and legal assistance.

Joy for Children is at the forefront of Uganda’s fight to end child marriage and female genital mutilation, and is the coordinator for Girls Not Brides Uganda, a national alliance with over 80 NGO members. At a community level, the organization applies a holistic approach providing support to girls at risk, and works to change commonly held beliefs and practices that push girls into early marriage.

Equality Now is partnering with Joy for Children to strengthen the legal rights of women and girls in Uganda, including joining forces to petition Parliament on passing the Marriage Bill, which would introduce more effective legislation to combat child marriage.

My inspiration comes from my upbringing. When I was growing up I saw children being subjected to abuse or neglect. Lots of girls were mistreated by their families or at school, many dropped out of education, got pregnant or became house girls. It affected both rich and poor, I saw these problems and thought we have to do something. 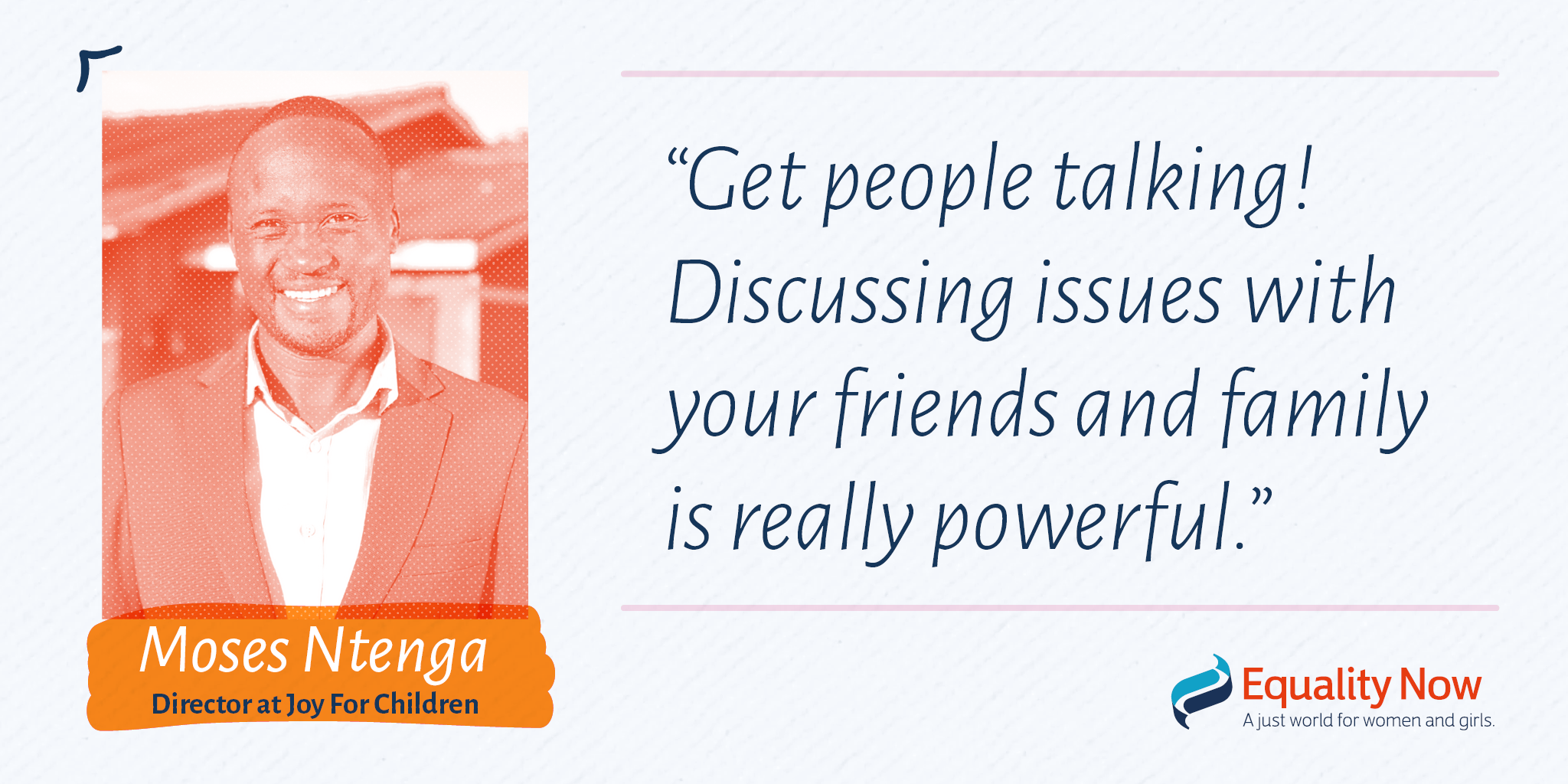 What was the turning point which made you become an activist?

I studied social sciences at university and my focus was on child sexual abuse because it has such a devastating impact on girls. If a girl gets pregnant, she often has to marry the father, even if she doesn’t want to. She drops out of school, has no income and is very vulnerable to abusive relationships. When I graduated I knew I wanted to play a role in improving my community by connecting with others and building bridges.

Back in 2006, no one talked about child sexual violence. People knew it was happening but it was seen as so common that it was normalized. The biggest challenge - although things are changing for the better - is that it can be hard for communities to understand underlying issues, especially those that have deep cultural roots.

Changing perceptions is difficult, it doesn’t happen overnight and sometimes the slow pace can be discouraging. You need to give it time and have a consistent message, that’s how you create long term positive impact. Joy for Children has showed me how you can make things better through cooperation.

What does “activism” mean to you?

For me, activism means being able to speak truth to power, identify a need and maintain pressure until it is addressed.

Get people talking! Discussing issues with your friends and family is really powerful - it might get them to shift their mindset and alter their behavior. If you don’t speak out nothing can change. You might not initially have a solution but if you raise the problem, together people can find answer.

Moses’ groundbreaking work creating community dialogue around sexual violence and children's rights is central to creating a safer society for women and girls in Uganda. But many legal and cultural challenges still exist. In partnership with Moses and other inspiring activists across Africa, Equality Now will continue to fight for better legal rights and protections in 2019.