How one mother and her family are breaking the cycle of child marriage in Uganda.

Loyia, 37, knows all too well the human rights violations that go hand-in-hand with child marriage. Growing up in rural Uganda, she went to school for just three years as her parents could not afford her education and at 15-years-old she was forced to marry. 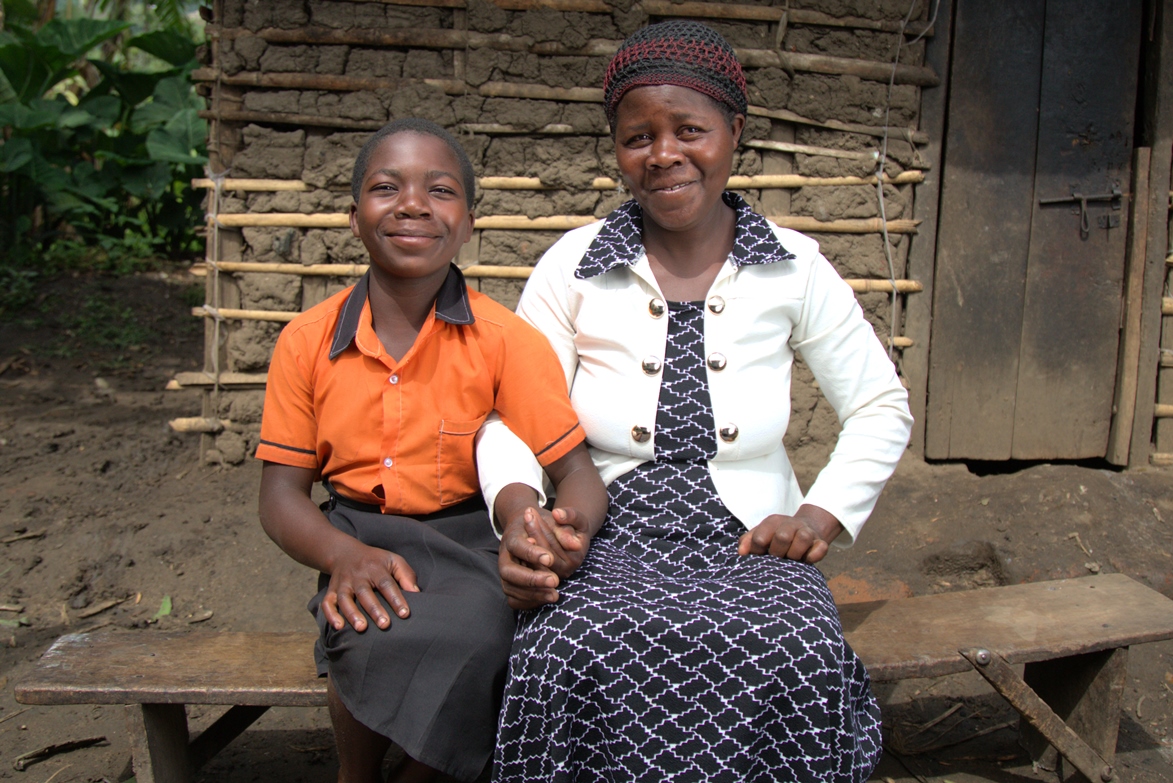 “My husband’s family paid a dowry of goats and money,” Loyia recalls. “I didn’t know this man before I married him and it never felt good because it was a forced marriage. I wasn’t happy but I had no choice, my parents made me.”

“I was 16 when I had my first baby and now I have seven children. There was a great deal of violence in my marriage and eventually, my husband left. He does not support our children so now I have to struggle.”

Loyia earns her living farming potatoes and sweet peas, and her income varies with the seasons.

“I try to manage, but I have problems getting enough food to feed everyone. Sometimes I don’t have enough to pay for school fees or other essentials.”

Poverty is one of the main causes of child marriage in Uganda. Parents struggling to cover school costs or other basics such as food or sanitary pads can view marriage as the best way to ensure their daughter has long-term security because a husband is supposed to provide for her.

“The very act of child marriage is accompanied by other rights violations such as physical and psychological coercion, physical and emotional violence, discrimination and subordination of girls. This sometimes can even lead to the death of the girl.”

Excluded from decision making regarding the timing of marriage and the choice of spouse, girls face an abrupt and often violent initiation into sexual relations. Before being emotionally or physically ready for sex, and denied the right to consent, they are essentially subject to statutory rape.

Those who become pregnant before they are biologically ready are at further risk of harm, including miscarriage, post-partum hemorrhaging, and obstetric fistula. In Uganda, adolescent girls make up 20-30% of all maternal deaths, and babies born to young mothers are more likely to be premature, underweight, and stillborn.

For those girls who survive pregnancy, their marital status means they are unlikely to continue at school, and being saddled from a young age with a child impedes their ability to leave the home to access work, education, or other support services.

A lack of schooling also means these girls are denied the opportunity to gain skills required to secure well-paid employment, upon which financial independence and social mobility are built. This deficit is passed onto the next generation as mothers with low education levels are less able to support their children’s own learning as they have limited knowledge and monetary resources.

Under the Children Act (2016), the minimum legal age of marriage in Uganda is 18 years old with no exceptions. However, there are challenges with enforcing the ban as child marriage is not defined within the penal code, and perpetrators often do not face justice unless there are signs of serious violent assault.

Despite all the financial and social pressures surrounding child marriage, Loyia is determined her own children won’t fall into the same cycle of poverty and abuse she endured as an underage bride.

Every morning, Loyia's 13 year-old daughter Pofia takes her goat to the field to graze and brings it home in the afternoon when she returns from school. It’s a simple but revolutionary act that is helping prevent her from joining the forty-percent of girls in Uganda who marry before age eighteen.

“It is just my mother who takes care of us because my father has left,” explains Pofia. “She digs for money and when she gets sick and isn’t able to work, it is very hard for her to support us.”

A goat can make a big difference, says Moses Ntenga, founder and director of Joy for Children Uganda, which provides goats to school-girls free of charge on the condition that the girls stay in school. They can breed the goat and sell their offspring to generate vital income.

“We want to give girls incentives to complete their education,” says Ntenga. “Most marriages are arranged by parents, and there is a lack of awareness that the legal age of marriage in Uganda is 18. Girls are expected to marry when they are young, and the quicker she reaches physical maturity, the earlier she is likely to be married.”

“Girls face a lot of pressure to agree to a proposal. If a daughter tries to resist, she is often told many nasty things and may face abuse and violence at home.”

Cultural change can be slow to take hold. Ntenga points out that, while things are changing for the better, the biggest challenge facing activists is that it “can be hard for communities to understand underlying problems associated with child marriage, especially those that have deep cultural roots.”

It’s those challenges that underscore the importance of having a robust system of laws that protect women and girls.

“Laws create the necessary social structures which deliver services that respond when a girl is married off,” says Equality Now’s Murunga. “Without law and its application, human rights are just aspirations.”

“It is vital to have the right laws, policies, and practices in place to protect girls from child marriage. Laws provide a basis for policy and budgeting for the protection of individual human rights.”

As activists and lawyers work to secure better legal protections against child marriage in Uganda, Joy for Children is doing work at the grassroots level that is making a life-changing difference to girls like Pofia.

“It is important for girls to stay in school,” says Pofia, who plans to be a nurse when she grows up. “You shouldn’t get married when you are young because if you do, you’ll miss out on your education. I want a good job so I can take care of my family.”

“It’s a good idea that my daughter has been given a goat,” Loyia says with a smile. “It helps us to keep her in school. We can breed it to have one kid a year that we can sell for 80,000 shillings (around US$21). We can use the money to pay for school fees and scholastic materials.”

“Most women in our community have not gone to school, are sidelined and they don’t get the help they require. I want my daughters to go to school because I want them to achieve what I did not.”

Take action today to call for the implementation and enforcement of laws that make sure no girl is a bride.