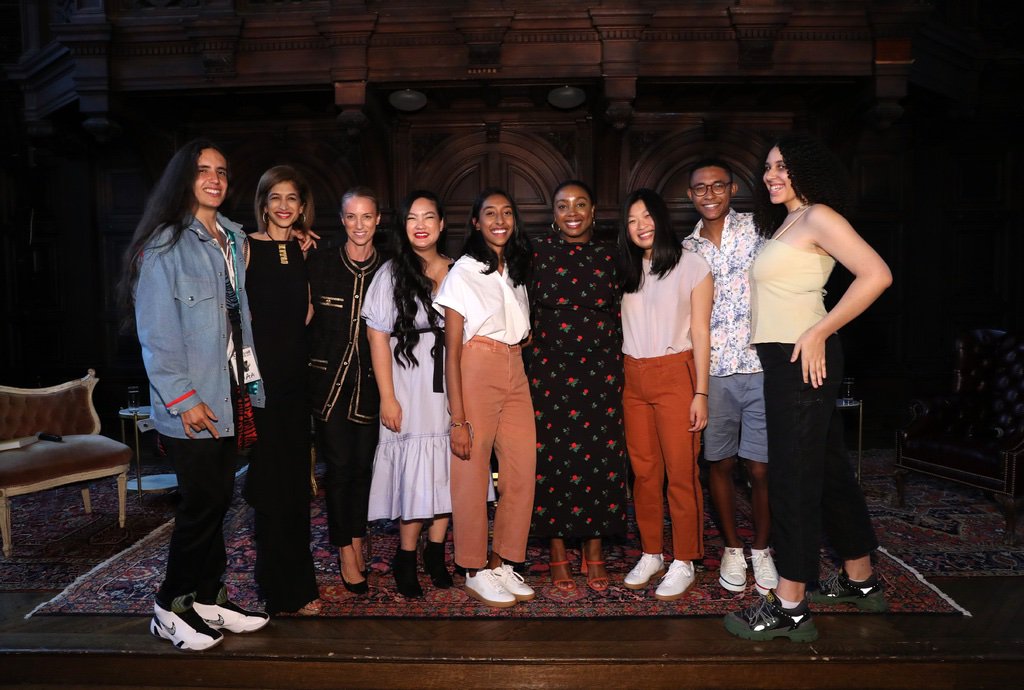 On Tuesday, July 23, Equality Now and Gucci co-hosted a panel of youth activists to discuss key issues facing our society today from race relations in America to ending sexual violence.

The 2019 Nobel Peace Prize nominee and CEO of Rise, sat on the panel to discuss her work in bringing justice for rape survivors by unanimously passing the Sexual Assault Survivors’ Bill of Rights, which also helped introduce 26 bills aiding sexual violence survivors.

Activists and authors Priya and Winona also joined the panel to share their experiences writing their book Tell Me Who You Are in which they traveled to all 50 states to shed light on the lived experiences of race and identity in America. Together, they are also CEOs of their organization CHOOSE. They discussed their motivations behind publishing their book to provide a textbook for racial literacy in American schools, citing that “just as we need to learn how to pay our taxes, we need to learn how to live with each other".

As an artist and activist, Sage discussed the ways in which art and the internet have helped spread her work. Since beginning her transition at 13, through public advocacy, policy work, and journalism, Sage has taken on the responsibility of tackling the systemic issues within our public school system. This year Sage appeared in The Future is Fluid, an Irregular Labs film presented by Chime for Change, and has continued to work closely with Chime towards the amplification of youth voices and global gender equity.

William is the 2018 New York City Youth Poet Laureate and recent graduate of Stuyvesant High School. William discussed expressing activism through his poetry and his book How They Call You. Through his work, he hopes to inspire more people to incorporate activism into their daily lives.

The artist-activist rounded out the panel, adding his perspective as an indigenous climate activist and hip-hop artist. Xiuhtezcatl contributed on a number of local and international initiatives, from removing pesticides from NYC parks to being a member of a youth-led lawsuit against the US government for failing to protect the atmosphere for future generations.

Highlights from the discussion

Through discussions and an informative Q&A section, panelists offered calls to action for both individuals as well as companies to support everyday activism.

In discussing everyday activism, panelists agreed that public perceptions surrounding “activism” or “activists” have become a way to separate change-makers from others, when in fact, anyone can and should be an activist.

Panelists agreed that while there are drawbacks to the use of the internet and social media in activism, it is not enough to completely write off their place in pushing activism forward. Sage added from her personal experience that “there are so many young people who don’t know what life can be or what life is outside of their hometown… the internet is truly a lifeline.”

William Lohier highlighted the need to change public perceptions of activism, saying “activism is a way of living - it’s something we incorporate into our regular lives.”

Other panelists included the need for diversity within companies, with Priya Vulchi stating that “it’s important for those in positions of power and privilege to lift those who are not, and take that as a responsibility and not a choice,” and William Lohier adding that not only is it important to hire a diverse group, but to have diversity in higher level positions. Xiutezcatl Martinez added that “we’re seeing young people being more vocal in our spending, just as we’re seeing young people being vocal in our voting.”

Panelists acknowledged the role of companies like Gucci in being socially conscious and highlighted the work Chime for Change has done to help activists. Winona Guo added that “social consciousness is a requirement… it’s not extra points,” echoing Xiuhtezcatl’s sentiments that more and more people are expecting consistent company support for social issues.

Gucci’s global campaign Chime for Change was founded in 2013 to convene, unite and strengthen the voices speaking out for gender equality, with a focus on Education, Health and Justice. To date, the campaign has raised $15 million to support projects and advocacy in 89 countries, including their current support of Equality Now’s Youth Activism project in the Middle East and North Africa Region. Through the funding of 430 projects with 156 partners, Chime for Change’s support has directly benefited more than 570,000 girls and women globally and reached more than 3 million family and community members.

We extend a huge thank you to Gucci and Chime for Change for convening this group of passionate youth activists and organizing this important dialogue.

At Home With Elif Shafak: Feminism, Faith and Women's Rights in Life & Literature

As we all prepare for an unconventional holiday season, many...

We’re back with the October edition of Equality Now Recommends...