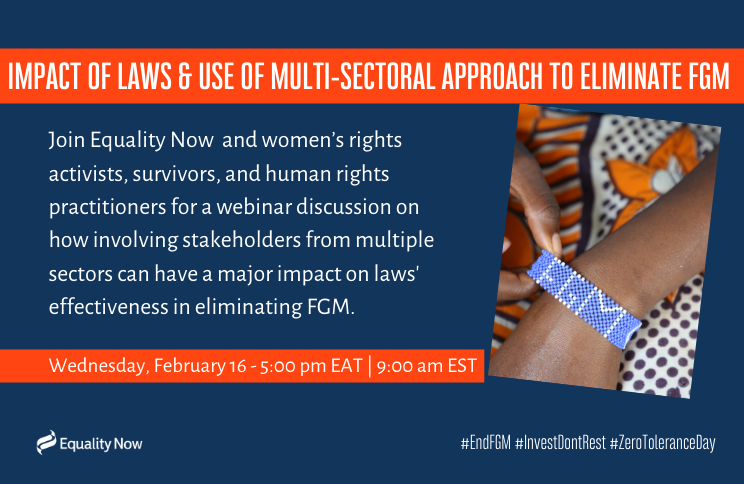 Female Genital Mutilation (FGM) is an extreme and violent form of discrimination against women and girls that violates several of their human rights such as the right to dignity, right to life, freedom from torture and inhuman treatment, freedom from discrimination based on gender, and right to the highest attainable health among others. Its effects are lifelong and affect the quality of women’s and girls’ lives.

While FGM is largely thought to be practiced in Africa and by people of African descent, Equality Now’s report titled Female Genital Mutilation/Cutting: A Call for a Global Response found that FGM is practiced in 92 countries and therefore FGM is in fact a global concern. As efforts are made to end FGM through law and advocacy, globally, the trends are changing in attempts to continue harmful practices such as the rise of labiaplasty, cross-border FGM including the return of children from the diaspora to their parents’ countries of origin which practice FGM, and the medicalization of FGM. Therefore interventions to eliminate FGM need to be holistic and integrate a multi-sectoral approach (MSA) to be able to address the emerging issues.

Join Equality Now and women’s rights activists, survivors, and human rights practitioners for a discussion on the importance and the role of law and MSA in the elimination of FGM.

Invest in the Multi-Sectoral Approach to end FGM

As Zero Tolerance Day for Female Genital Mutilation approaches, we look at why anti-FGM laws are still needed, and how a mult...