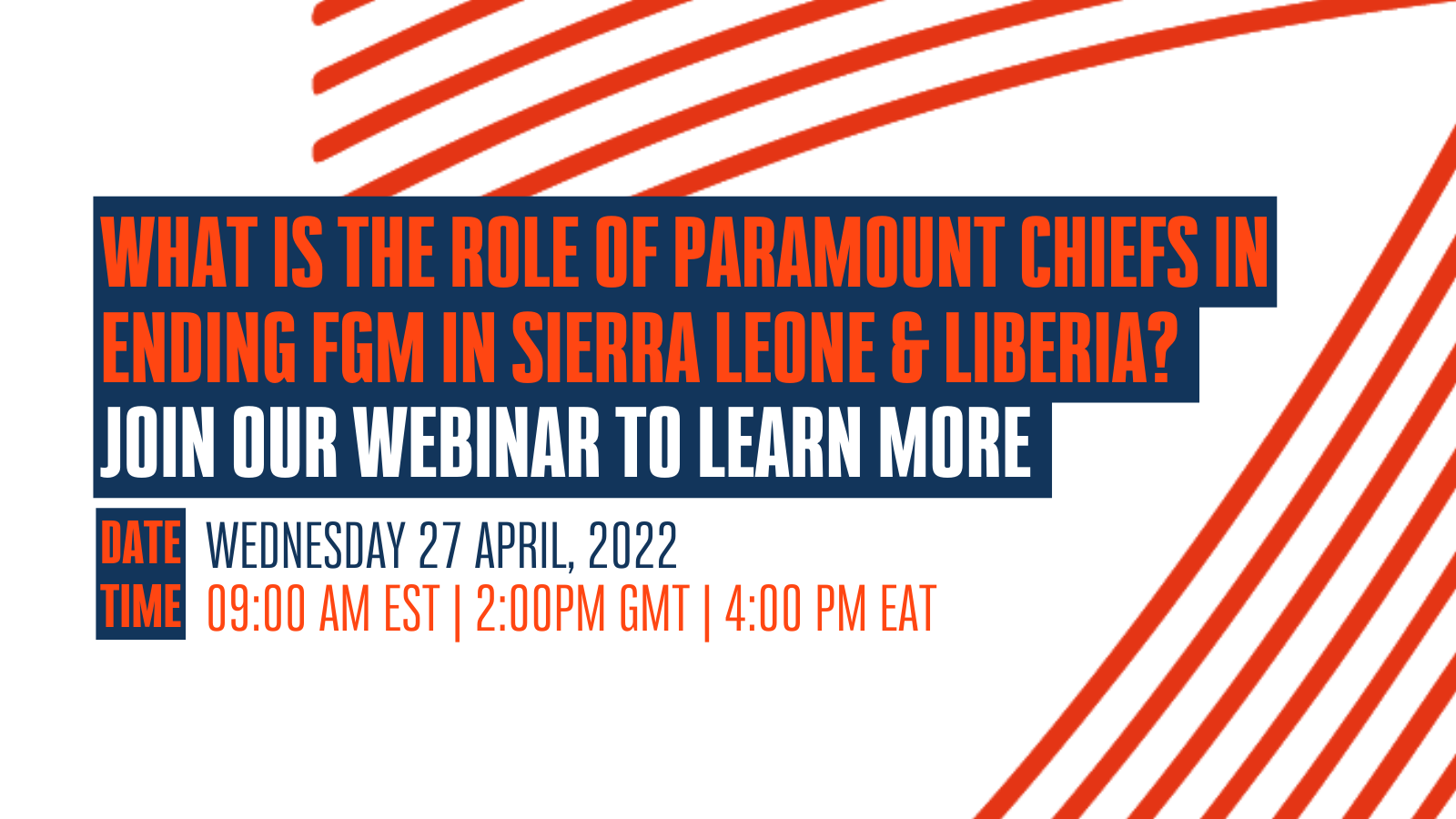 Equality Now Expert Panel: The Role of the Paramount Chiefs in ending FGM in Sierra Leone and Liberia

Join Equality Now’s expert panel on 27th April at 9 am EST/2 pm GMT/4 pm EAT to explore the role Paramount Chiefs and their communities play in ending FGM and the practical techniques campaigners have used to bring communities into the movement to end FGM.

Female genital mutilation (FGM) is an extreme and violent form of discrimination against women and girls that violates several of their human rights such as the right to dignity, right to life, freedom from torture and inhuman treatment, freedom from discrimination based on gender, and right to the highest attainable health among others. The ongoing global movement to end FGM has led to many countries adopting laws prohibiting FGM, but this human rights abuse still continues, on every continent (apart from Antartica).

Equality Now’s 2020 report, Female Genital Mutilation/Cutting: A Call for a Global Response, shows that FGM is practiced in 92 countries and is a universal global concern.

Often FGM is a form of initiation of girls into adulthood. It is performed together with other rituals and teachings to prepare them for marriage.

In Sierra Leone and Liberia, FGM is used for this purpose, alongside being a pre-requisite to join the powerful Bondo and Sande – societies. Members take an oath of secrecy and are not allowed to discuss what happens in the bush with non-members with the consequence of a family curse or infertility.

Neither Sierra Leone nor Liberia have enacted specific laws prohibiting FGM despite the efforts of campaigners. However, both countries have declared temporary bans in 2018.

In February 2022, the head of the Traditional Council of Liberia, Chief Zanzan Karwor, announced a three-year ban which is a bold and positive step toward permanently prohibiting FGM in law for women and girls.

Anti-FGM campaigners in Sierra Leone and across the world hope that a similar ban can be adopted in Sierra Leone. But how can the movement ensure this progressive next step?

Join our experts on 27th April at 9am EST/2pm GMT/4pm EAT to explore the role Paramount Chiefs and their communities play in ending FGM and the practical techniques campaigners have used to bring communities into the movement to end FGM.