When people think of sex trafficking, they often think of commercial sexual exploitation—where traffickers and pimps profit monetarily from the exploitation of human beings. However, under the Palermo Protocol, the internationally agreed upon definition of trafficking in persons doesn’t necessarily require an exchange of money to have taken place.

In war-torn Uganda, the abduction of boys to become child soldiers has been widely reported on. However, the fate of thousands of Ugandan girls, who were abducted and sexually exploited, forced to become sex slaves for rebels and soldiers during Uganda’s civil war, has received less attention. They, too, are victims of trafficking and their voices must also be heard.

As a young child, my life was good and I felt happy. I spent many evenings playing netball and dancing with my friends. My family’s home was located in Unyama, a village outside of Gulu, in northern Uganda. I am the youngest of four children, two boys and two girls. As a child, I helped fetch water and cook for my family, but I also attended primary school. My father was never home, so my mother and grandfather raised me. We were a happy family that loved each other.

When I was 10 years old, I was married against my will to a brigade commander. The first time he forced me to have sex; I bled and cried a lot.

When I was nine years old, my life changed suddenly. On the night of May 22, 2000, rebels with the Lord's Resistance Army (LRA) descended on our home. My mother and I were asleep in our hut when they barged in and woke us up by kicking down the door. Five men caught us right away. One man held me down, ripped off my blouse, and tied me up. I watched in horror as another man beat my mother badly. One of the rebels brought in a large bag of posho—maize meal—and ordered me to carry it. They tied up my grandfather and others in my village and forced all of us to walk and walk without rest to an unknown destination. After a few days, the rebels allowed my grandfather to leave, but he could not even look into my eyes to say goodbye. He walked away in silence. The rebels told me not to be afraid because they would take me back home, but I didn’t believe them. I feared they were going to kill me.

The rebels didn’t kill me, but they forced me to kill others. I was trained to fight and shoot a gun. At first I refused, but they beat me and threatened me with death. The rebels made examples out of some of the children to warn the rest of us what would happen if we disobeyed their orders. The boys were forced to rape, and the girls got raped. All the girls were divided among the male fighters as “wives.” The leaders believed the male fighters would escape if they did not have “wives” to fulfill their sexual desires.

When I was 10 years old, I was married against my will to a Brigade Commander. The first time he forced me to have sex; I bled and cried a lot. I was in great pain, but my “husband” had a gun next to him and I had seen him use it before so I tried to stop crying. Every day he called me and demanded sex. Whenever I tried to resist, he beat me to the point of paralysis. Sometimes I felt so weak because we had no food or water, but I had to go to him anyway. The Brigade Commander had a total of 20 “wives”—some were very young, but most were between 12 and 18 years old. If the rebels raided a village and abducted a beautiful girl, she would be forced to marry the Brigade Commander. Since I was also a soldier who fought, I was more respected than some of the other girls who were only “wives.” When my “husband” would go away, I would stay with his other “wives” and keep them in line. I knew that if any of them ever escaped, I would be killed.

When I returned home . . . My neighbors and community were afraid of me and shunned me; they knew I was forced to commit unspeakable acts of violence.

A year into my captivity, a big fight erupted not far from where we were being held between LRA members and Ugandan government soldiers. I decided to use the opportunity to run away, as I would rather die trying to escape than die in the bush as a sex slave. Two other girls ran with me, and we made it to the barracks where the government soldiers were staying. When we arrived, the guards took our guns and gave us clothes and food. After a while, they took us back to our villages. When I returned home, my mother accepted me despite my past. However, my neighbors and community were afraid of me and shunned me; they knew I was forced to commit unspeakable acts of violence. Life was difficult even at home. I suffered from extreme insomnia, haunted by memories of the rebels. I was still breathing, but somehow I didn’t really feel alive. My mind kept replaying the past. I tried to return to school when I was 12, but I couldn’t concentrate on what my teachers were saying. I found other people who had suffered like me, but I still felt so alone.

One day when I was 15, I was walking home from school when a man around 19 years old approached me and forcibly took me into his hut deep in the bush. I tried to fight the man, but he was too strong. No one was around to help me or hear my screams. When I went home, my mom chased me away, telling me to go back to the man since he was my husband now. I didn’t want to go back to him; I wanted to go to school. However, I had nowhere else to go, so I returned to him and soon grew pregnant with my daughter. My family accepted me again since I was living with the man as his wife. I spent a year with my new “husband”, but he drank too much alcohol. We would fight and he would beat me badly for no reason. After one particularly vicious beating, I took my child and fled to my mother’s home. I stayed at home for six months and then I heard about ChildVoice International.

Since then my life has changed. I am very different now. I went to ChildVoice not speaking a word of English. During my time there, I learned English and skills such as catering, baking, and tailoring. I also found solace in my growing relationship with God.

After leaving ChildVoice, I found work in a bakery in Pece and met my current husband. Unlike my first husband, he is good to me and treats me as an equal. For the first time in my life, I have hope for the future and my children’s future. Today, I believe I can do many good things if I find a way. I am much happier now and can even laugh sometimes. On most days, I can talk about the past without feeling fear and shame. My past no longer stops me from living my future.

I want people to know what has happened here in Northern Uganda. Even though the fighting has ceased, men continue to abuse women. Those who have escaped from the bush should be able to return to school and learn some skills so they can have a future. In my country, we do not provide enough support for child soldiers. Right now, there are only a few organizations to help us. Many of us survived the conflict, but we can do nothing but cry about our past since we have no family, food, money or skills. The government needs to provide more support for former child “wives” of the LRA rebels.

WHAT YOU CAN DO:

Concy’s story is, tragically, one of many. Award-winning journalist Kathy Cook’s Stolen Angels: The Kidnapped Girls of Uganda tells the story of thirty Ugandan schoolgirls who were abducted in 1996 by LRA leader, Joseph Kony, and exploited as child soldiers and sex slaves. 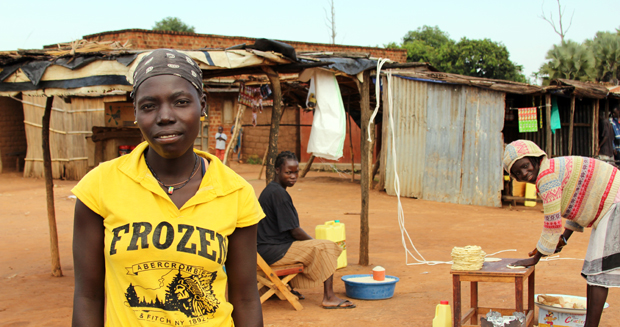 I grew up in a middle class subdivision in western...

Lilly, who suffered a turbulent and abusive childhood, was introduced...

What is the scale of trafficking for sexual exploitation in the UK?