5 Global LGBTQ+ Leaders you Should Know About this Pride Month

All people, regardless of sexual orientation or gender identity, should have equal rights and be able to live free from harm, coercion, or discrimination.

To celebrate Pride Month, we're highlighting some incredible activists and leaders past and present working for LGBTQ+ rights around the world.

Dr. Rachel Levine made history this year as the first openly transgender person to be confirmed to federal appointment by the United States Congress. Her appointment to assistant secretary for health in the Department of Health and Human Services coincides with an increase an anti-trans legislation across the USA. As someone who has encountered transphobia and hate herself, she is has pledged to prioritize the mental and physical health needs of transgender Americans.

I will do everything I can to advocate for transgender and LGBTQ youth, to educate people and states about LGBTQ and specifically transgender issues and work towards fairness and equality. 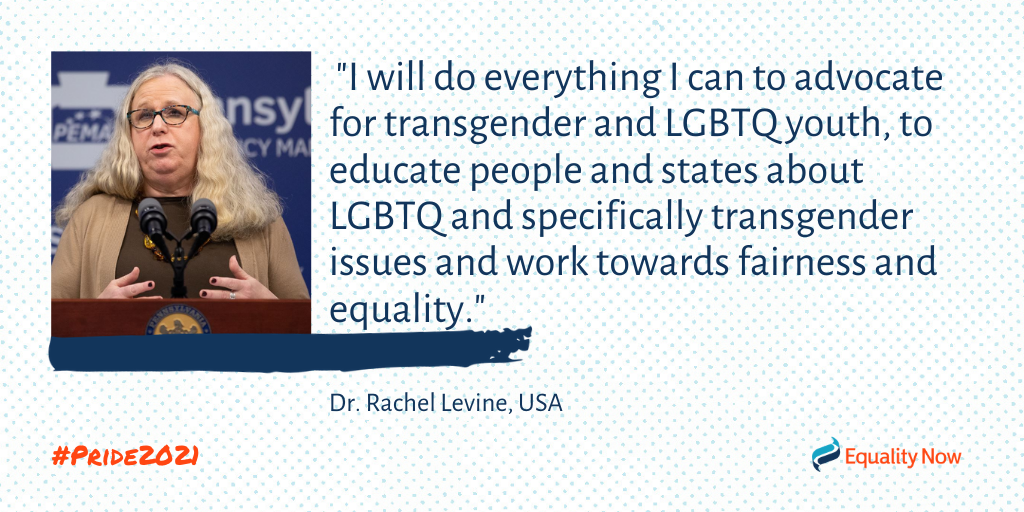 Noting a lack of intersectionality in the LGBTQ+ movement in the UK, Lady Phyll co-founded Black Pride in 2004 to celebrate “LGBTQ people of African, Asian, Caribbean, Middle Eastern and Latin American descent and to promote and advocate for the spiritual, emotional, and intellectual health and wellbeing” of these communities.” As one of the most prominent Black lesbians in Britain, Lady Phyll is a tireless activist in the fight for queer liberation as well as increasing the visibility and voice of people of color within the larger LGBTQ+ community.

“In predominantly white countries, it’s easy for us to forget that we are part of the global majority, that we are connected to billions of people across the world whose dreams for and actions toward liberation align with our own.” 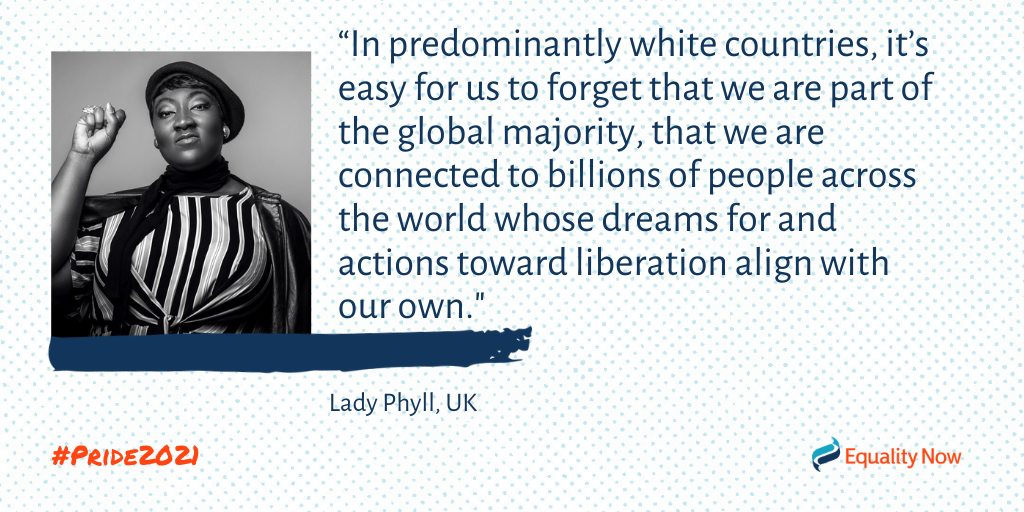 In a country where homosexuality is criminalized and a bill entitled “Kill the Gays” was once introduced in parliament, Frank Mugisha risks his live to speak out for LGBTQ+ rights in Uganda. He founded  “Icebreakers Uganda” and “Sexual Minorities Uganda” to support LGBTQ Ugandans who face stigma, violence, and isolation on a daily basis. Additionally, Dr. Mugisha regularly speaks to international audiences in order to draw attention to the human rights violations experienced by the LGBTQ+ community in Uganda.

“For me, it is about standing out and speaking in an environment where you are not sure if you will survive the next day; it is this fear that makes me strong, to work hard and fight to see a better life for LGBTI persons in Uganda.” 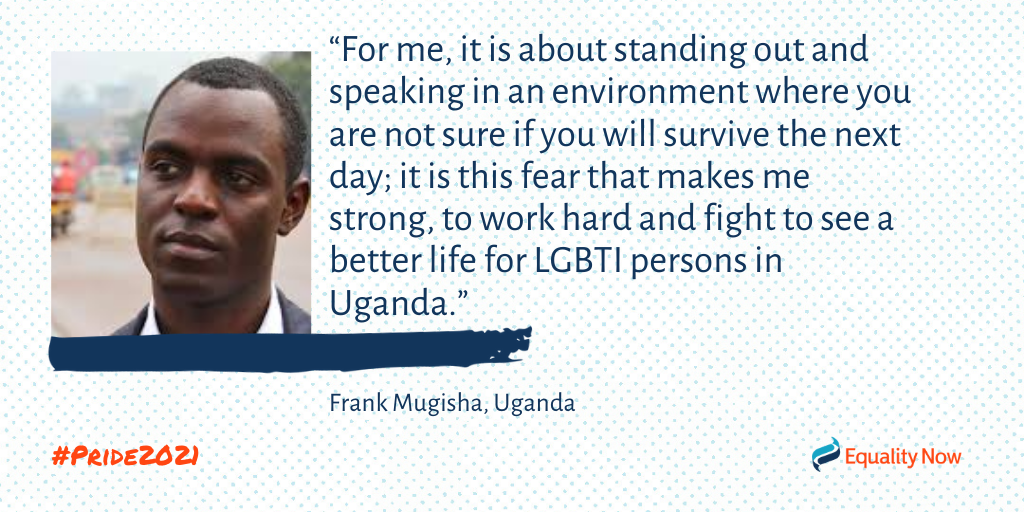 In 2014, Michelle Demishevich became Turkey’s first openly transgender news anchor. While homosexuality is not illegal in the country, homophobia and transphobia is widespread and reinforced by Turkish President Recep Tayyip Erdoğan. Despite experiencing a violent attack and repeated harassment, Ms. Demishevich was determined to be a visible face for LGBTQ+ rights in Turkey.

"Activism is not about only marching on the streets with flags. What I call activism is my working as a TV reporter when other trans people are only depicted negatively by the media. It is important to show that 'others' are also capable of doing meaningful things.” 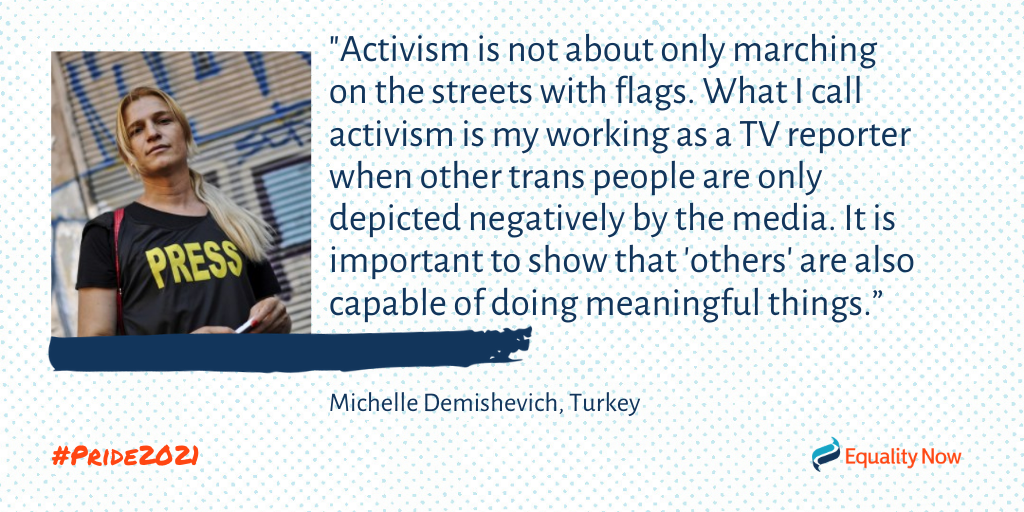 A lifelong activist for the rights of the LGBTQ+ and HIV-positive communities, Aldo Davila became the first-ever opnely gay parlimentarian in Guatemala in 2020. In his new goverment position, he continues to advocate for marginalized populations, including indigenous groups and survivors of sexual violence. Despite constant threats

“Being elected means carrying a responsibility towards my voters but also groups which historically have been excluded from society, like teenagers, women and indigenous peoples. They have always been afforded a subordinate position in society. So now I want to give these people a voice in national parliament.” 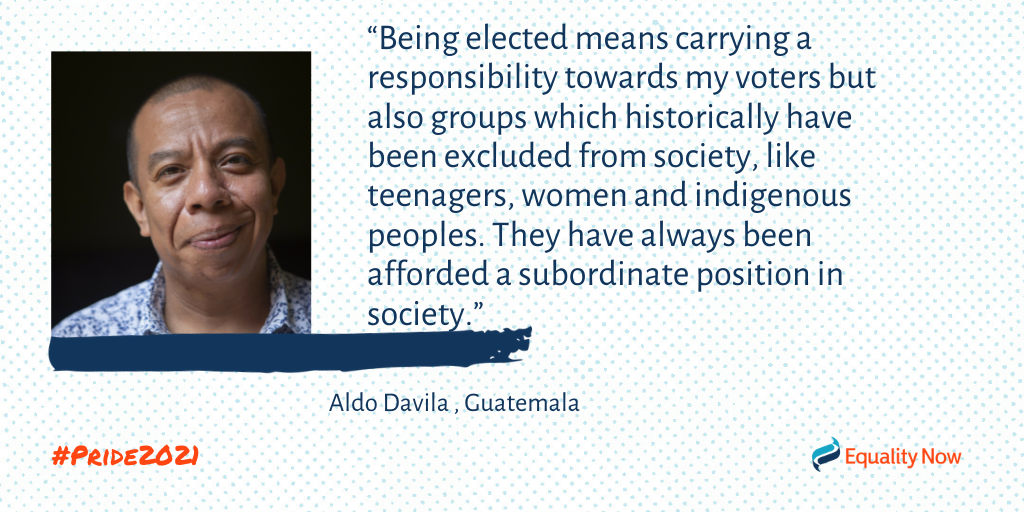 We’re back with the June issue of Equality Now Recommends,...