Equality Now has the privilege to partner with women’s rights activists from around the world. Through a series of blogs, we will share with you their unique perspectives and challenges advocating for change in their communities.

This month we spoke to activists across Eurasia, where we’re working with women’s rights groups to hold governments accountable for ending violence against women, including sexual violence and ensuring access to justice.

The society in Georgia is very patriarchal, so we have to work hard on perceptions of gender roles and combat deeply ingrained stereotypes. Before every legislative change, we have to persuade society of the existence of the problem and its gendered nature.

The women's movement is quite strong in Georgia. Activists and groups are capable of bringing women's issues to the political agenda. Stereotypical attitudes are changing slowly but the progress is visible. 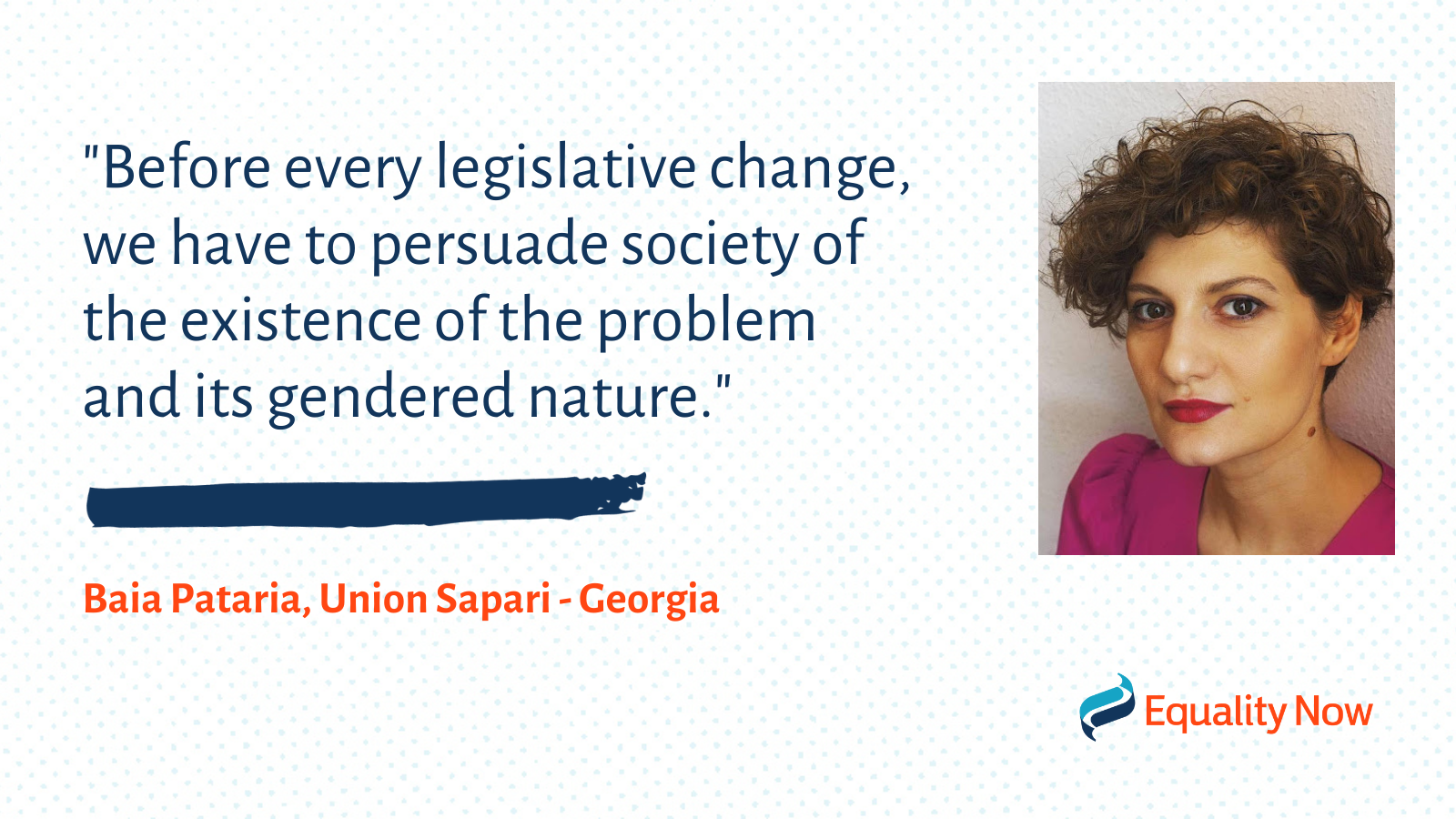 I spent many years of my life working as a lawyer and working directly with women who have experienced some form of psychological or physical violence.

I founded Impact Innovations Institute (IMIN) to develop the Safe YOU mobile application and platform so that women had access to an innovative solution that assisted them through prevention, protection, prosecution in the face of Violence Against Women (VAW). We wanted to make the Safe YOU solution work to raise awareness, educate, protect and empower women through knowledge sharing and community.

In Armenia and Georgia, only after a little more than a year we are seeing that over 16,000 women across both countries have benefited from Safe YOU. More specifically, the app was credited with saving 2 lives – a mother and her 3-year-old daughter. 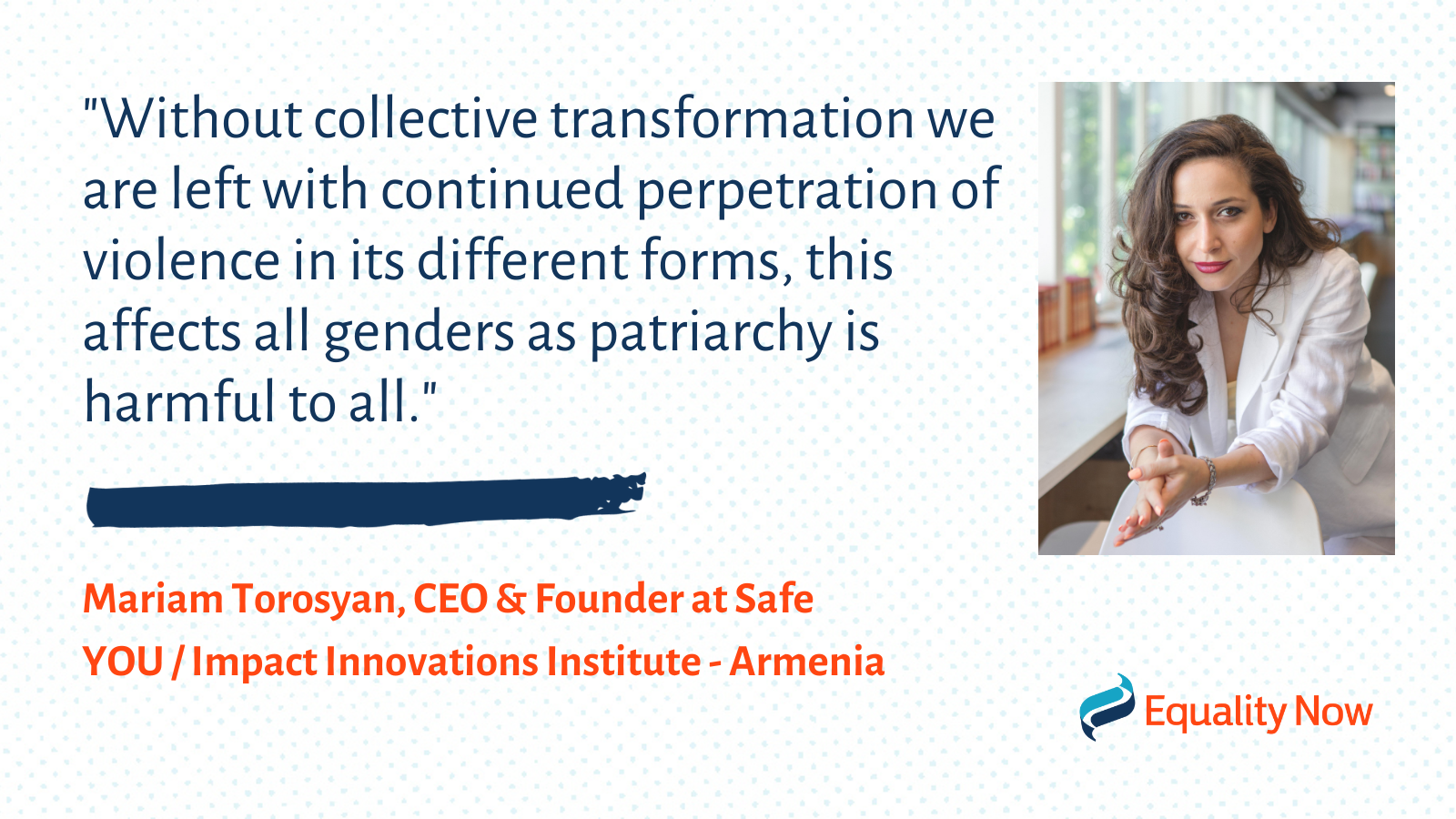 I have 27 years of experience in crisis counseling and advocacy, and currently provide support to survivors of sexualized and domestic violence and work to counter human trafficking.

The "Sisters" Center is a non-governmental and non-profit organization operating in Moscow since 1994. The center provides free, anonymous, and confidential assistance to survivors of sexualized violence and their loved ones, and also conducts educational activities.

We’ve been at the forefront of the work supporting survivors of violence since 1994. In the first half of 2021 alone, over 1,500 people contacted us: 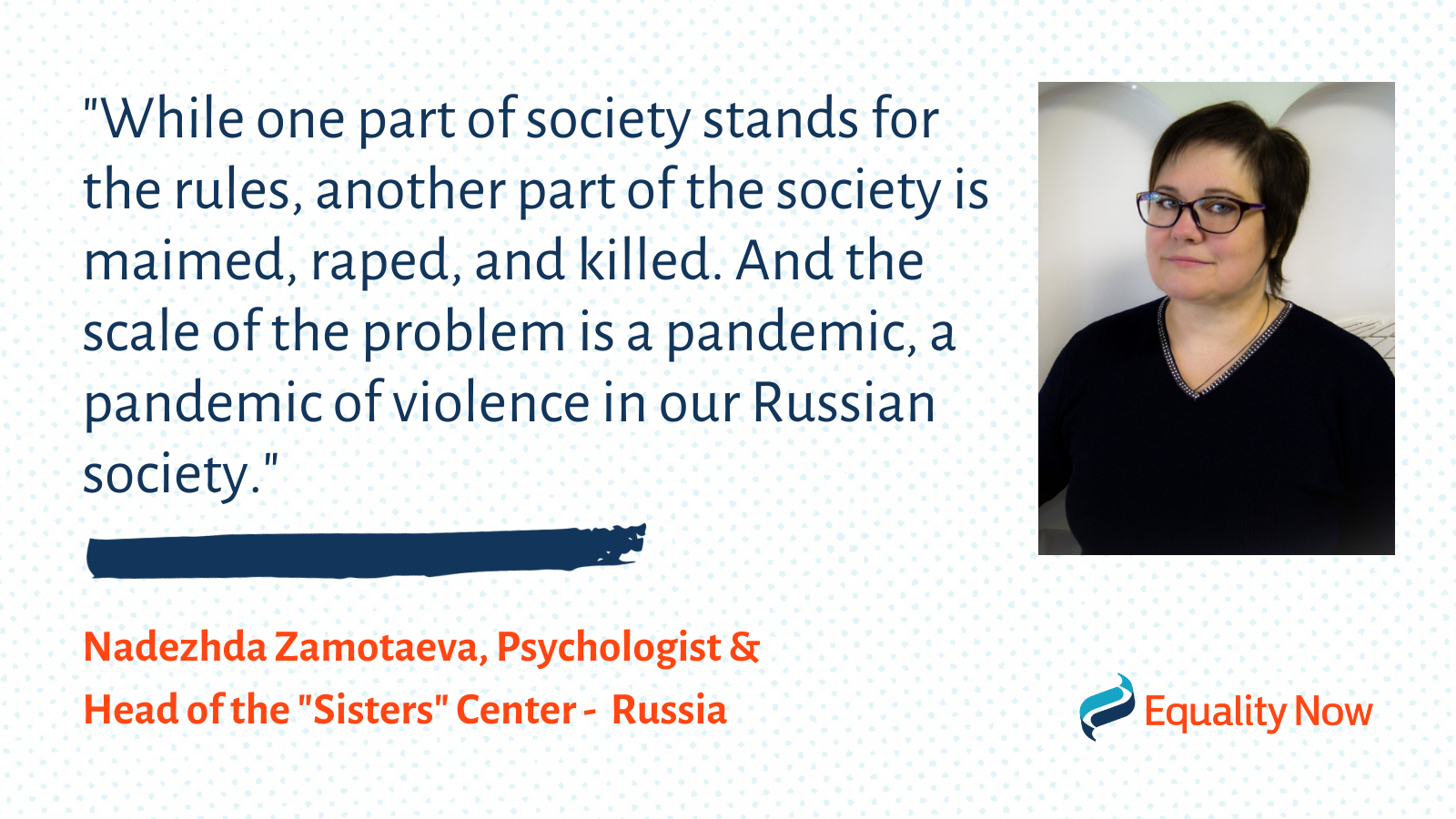 WILPF National Coordinator for Ukraine, participant of the Women's Dialogues Without Borders initiative

I work with the problems of violation of women's rights in conflict situations, the rights of women peacemaking activists, as well as with the topic of socio-economic rights. I am the national coordinator for Ukraine for WILPF, the co-organizer of the Women's March on March 8, the co-coordinator of the Women's Network for Dialogue and Inclusive World, and I participate in the research of the Center for Social and Labor Research.

The most important reform the government here could take to improve the status of women and girls would be to ratify the Istanbul Convention, and I hope we are close to that. This would provide the necessary mechanisms and strengthen the obligations of the state.

In addition, in my opinion, changes in the field of preschool and school education can change the position of women relatively quickly and effectively: funding full-time kindergartens and the creation of after-school groups. Today, extended schools are not provided for everyone, and kindergartens are open until 15: 30-17: 00, which does not correspond to the working hours of most parents. 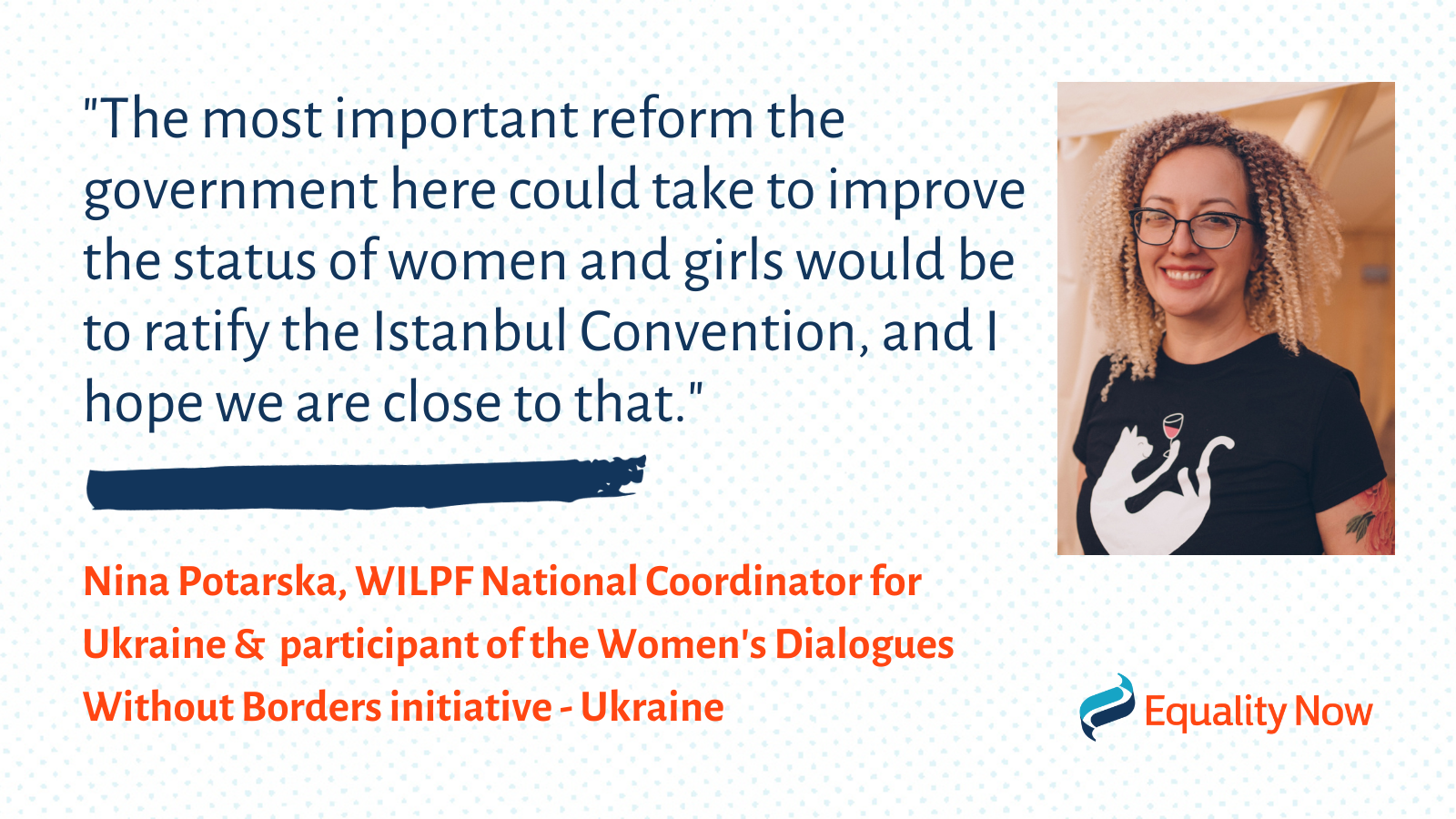 We have an informational project, we strive to change society's attitude to the protection of women's rights, and to introduce a culture of women’s mutual support, we fight stereotypes, tell stories of survivors of violence, provide free psychological assistance, we call for changes in legislation, and so on.

Patriarchal sentiments are strong in our society. When it comes to violence against a woman, often the emphasis is placed on the woman: how she behaved, what she was wearing, how well she performed her duties as a wife, and so on. Society believes that it is a shame to be raped, it is a shame to lose virginity, it is a shame to divorce. In short: were you born a girl? You are the one to blame! 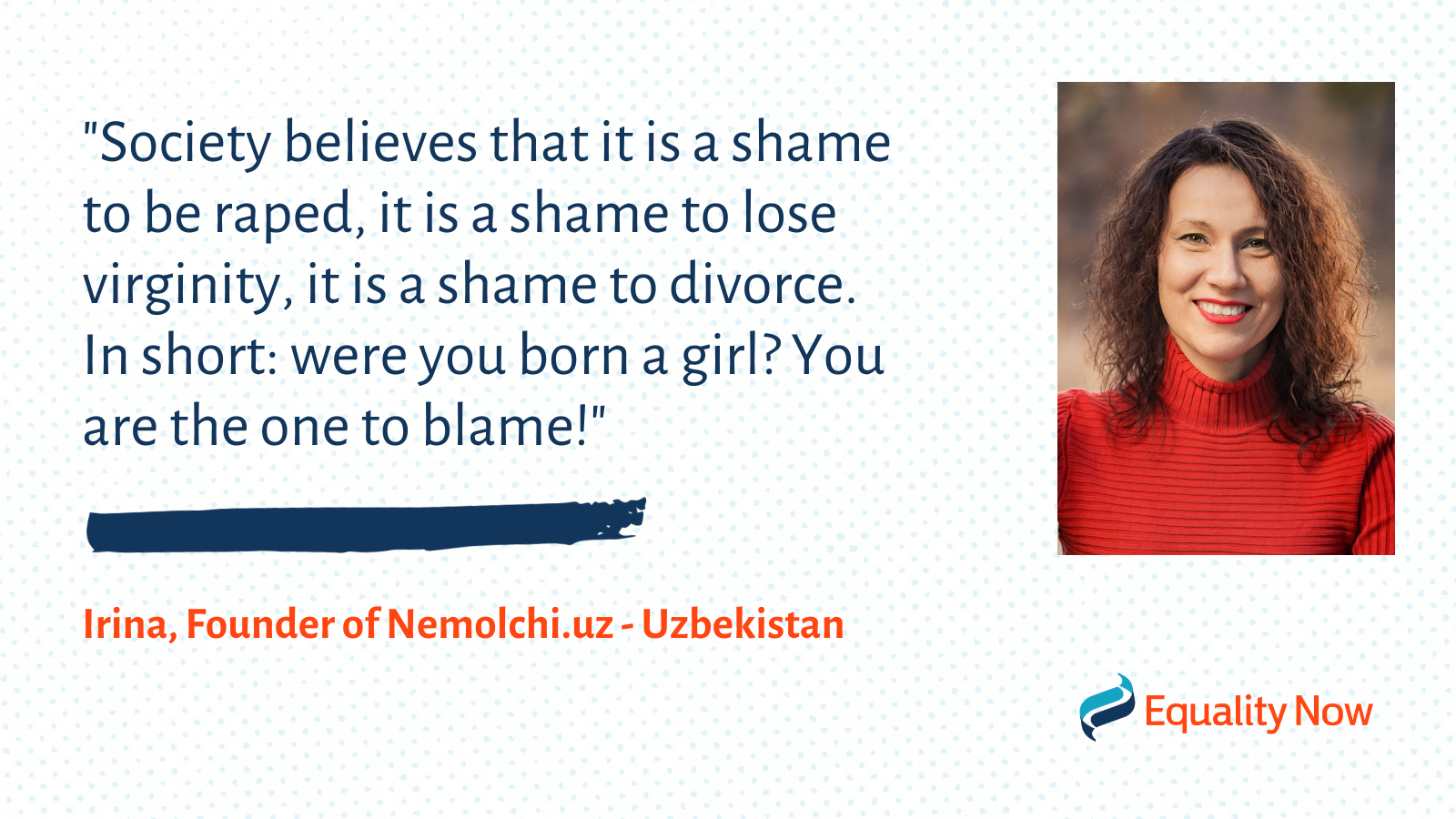